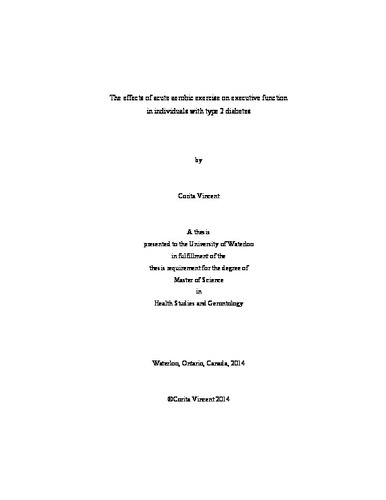 Prevention and treatment of type 2 diabetes mellitus (T2DM), relies heavily on self-care behaviours such as dietary modification, physical activity, and medication adherence. Ability to perform these self-care behaviours depends, at least in part, on executive function (EF). Recent evidence suggests a correlation between T2DM and impaired cognitive function, including EF. Given the importance of EF for regulation of behaviours, and the importance of self-care in diabetes management, attenuated EF would represent a potential barrier to proper disease management. Thus the objective of Study 1 was to examine the association between T2DM and EF through meta-analytic techniques. Medline, PsychoInfo, and Scopus, as well as article references, were used to identify studies comparing individuals with T2DM to a control population. Effect size was calculated using cohen’s d and random effects modeling, and the potential impact of moderators (age, sex, and T2DM duration) were examined. Review of 60 studies (59 articles), revealed a significant, small-to-moderate effect size (d=-0.249, p<0.001) such that those with T2DM have lower EF. This finding was consistent across all aspects of EF examined (verbal fluency, mental flexibility, inhibition, working memory, and attention), and the association was stronger for those with shorter disease duration. The findings of study 1 illustrate that although individuals with T2DM have a great need for EF, as evidenced by the reliance of self-care behaviours on EF, this population has lower EF upon which to draw to perform these behaviours. Thus, strategies that improve EF, such as aerobic exercise, may be particularly relevant to this population. Acute aerobic exercise has been shown to improve EF in young and older adults; however this effect had not yet been examined in individuals with T2DM. Thus the objective of Study 2 was to examine the effects of acute aerobic exercise on EF in adults with T2DM. A within-subject design was used to compare the change in EF task performance following moderate and minimal intensity aerobic exercise, using Stroop and GNG to measure EF. Analysis revealed a significant effect of moderate exercise in women (but not men) and recently active (but not inactive) individuals, such that moderate exercise mitigated the self-regulatory fatigue effect observed following exercise. This study provides preliminary evidence of a significant beneficial effect of moderate aerobic exercise on EF in female and recently active adults with T2DM.