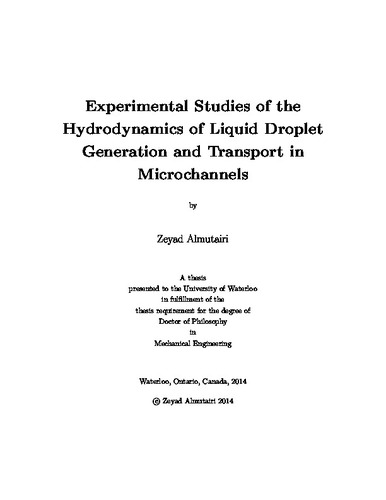 Droplet microfluidics is a promising field since it overcomes many of the limitations of single phase microfluidic systems. The improved mixing time scale, the increase of number of samples and the isolation of droplets are some of its virtues. The core of droplet microfluidics is a two-phase flow condition that is subjected to scaling of the confining geometry. With the scaling the complexities of the flow phenomena arise. For that reason both the processes of droplet generation and transport are not fully understood for various flow and fluid conditions. The work in this thesis aims to experimentally examine droplet generation and transport in microchannels for flow and fluid conditions that are experimentally challenging to perform. Examination of droplet generation in a T-junction microchannel design was performed with a quantitative velocity field approach known as micro particle image velocimetry (μPIV). The studies on droplet generation focused on very fast generation regimes, namely transition and dripping that have not been studied for a T-junction design. This achievement was accomplished because of the development of a fast optical detection and triggering system that allowed for acquiring images of different identical droplets at the same position. μPIV results indicate that the quantitative velocity field patterns of different regimes share some similarities. The filling stage in the transition and dripping regimes had some resemblance in their velocity patterns. The velocity patterns for the start of droplet pinch-off were alike for the squeezing and transition regimes. Furthermore, the presence of a surfactant in the droplet phase above the critical micelle concentration (CMC) did not have an effect on the general velocity patterns as long as the capillary number Ca was matched with the no-surfactant condition. The studies of hydrodynamic properties of droplet transport were performed in hard materials to avoid cumulative error sources, such as material pressure compliance and swelling effects. The project had several parts: designing a microchannel network that allowed studying the hydrodynamic properties of small droplets, surface treatments of the channel material for stable droplet generation and examining the hydrodynamics of small liquid droplets with sizes that have not been reported in the literature. The studies examined effects of changing the interfacial tension, viscosity, and flow conditions on the transport of droplets. The experimental results from the hydrodynamic transport studies indicated that for the droplet sizes that were examined the pressure drop of droplets was affected by the capillary number Ca and length of the droplet Ld. Also, the presence of surfactants altered the hydrodynamic properties of droplets. At a high concentration of surfactants the droplets pressure drop was reduced significantly. Moreover, the type of surfactant affected the magnitude of the pressure drop. Experimental results indicate that if the concentration of surfactants was very low (below CMC) it did not have an effect on the droplet excess pressure. These findings are important to consider in designing droplet microfluidic systems with complex channel networks that involve droplet sorting, splitting, and merging for droplets that contain surfactants.