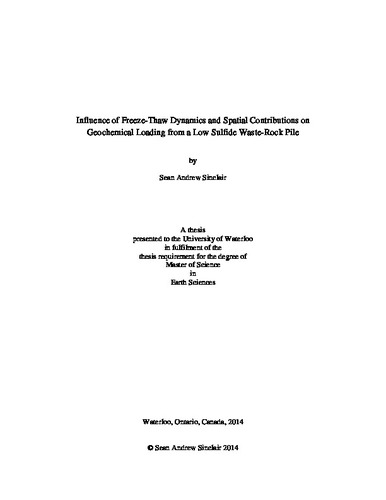 An experimental waste-rock pile (50m x 60m x 15m, 0.053 wt. % S) was constructed at the Diavik Diamond Mine, in the Northwest Territories, Canada to evaluate the generation of acid-rock drainage and the seasonal and annual release of various metals in drainage leachate. A dense internal instrumentation network enabled well resolved observations of temperature, air content, water content, fluid flow, microbiology, mineralogy and geochemistry within the waste-rock pile. Water samples were collected from soil water solution samplers (SWSSs) to measure core pore-water characteristics, from 4 m2 to 16 m2 scale basal collection lysimeters (BCLs) to measure core leachate characteristics, and from basal drains (3000 m2 basal area) to measure aggregated leachate characteristics. Monitoring of pore-water geochemistry within the core of the test pile indicated an evolving weathering front characterized by changes in predominant acid-consuming mineral-dissolution reactions. Initially, acid neutralization occurred through dissolution of carbonate minerals. A subsequent decline in pH was limited by acid neutralization through dissolution of Al- and Fe-bearing minerals. This lower pH environment was accompanied by increasing concentrations of SO4, Al, Fe, Ni, Co, Cu, Zn, Cd, Ca, Mg, K, Na and Si. Annual drainage cycles in the core of the test pile were characterized by distinct, high concentration ‘spring flushes’ followed by a steady decline of all dissolved constituents with minimums prior to freeze-up. Core trends were typical of freshets observed in polar environments and primarily explained by a combination of fluid residence time and the build-up of oxidation products over the winter. The opposite trend was observed in the aggregated pile drainage, whereby early-season low-concentration leachate was derived from snowmelt and batter flow and late-season high-concentration leachate was dominated by contributions from the core of the pile. Thermal data demonstrating the annual freeze-thaw cycle was used to delineate core and batter subsystems within the pile. Mean annual solute concentrations and geochemical speciation modelling results revealed two different environments within these subsystems. Concentrations in the core of the test pile were 2.5 to 8.5 times greater than concentrations in the batter. Dilution through snowmelt contributions and shorter flow pathways were expected to control solute concentrations in the batter subsystem. Aggregated basal leachate loading exhibited a linear annual increase for all ARD reaction products, with the maximum annual release observed in 2012. Between 2007 and 2012 core flow accounted for 13 % of the total drainage volume; whereas 35 to 51 % of major and trace metal loads were attributed to this zone. Parameter correlation analysis and core contribution estimates were used to identify common source minerals for elements and infer mechanisms controlling the mobility of dissolved metals (sorption, co-precipitation and precipitation-dissolution). By 2012, the release of pyrrhotite oxidation products from the < 5 mm reactive fraction of waste rock reached as high as 5.1 %, 9.0 %, 7.2 % and < 0.1 % for S, Ni, Co and Fe respectively. The results of this study indicate that a comprehensive understanding of thermal cycling is imperative when estimating seasonal and annual releases of weathering products from waste rock. Observations of active zone dynamics and the temporal and spatial evolution of waste rock drainage loading recognized in this study will assist in the advancement of reactive transport models describing ARD in cold climates.