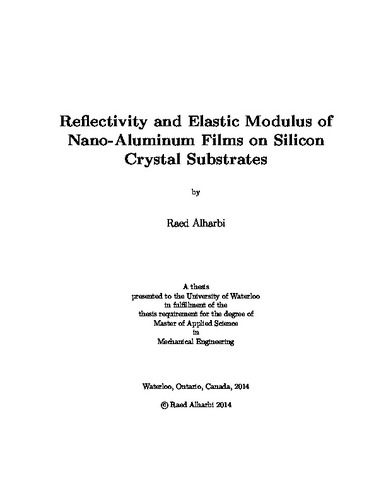 In this work, effect of film thickness on optical reflection and elastic modulus of the metal film at very low size was studied. We choose Aluminium as a reflective surface where it mostly used as a typical material for micro mirror device due to its high reflectivity. The effect of film thickness on the reflectivity had been performed at the range of 400-700 nm wavelengths for thin film thickness between 10 - 125 nm. The mirror fabricated by depositing the Al films on single crystal silicon (100) substrates using E beam evaporation deposition machine to get optimum flatness that is desired in the mirror fabrication. After that, reflection of the mirrors was measured using UV 2200 Spectrophotometer. Reflection also simulated using a powerful simulation tool, Opti-FDTD finite element package and the results were compared. Both of grain size and surface roughness of the films were measured using Scanning Electron Microscopy (SEM) and Atomic Force Microscope (AFM, tapping mode), respectively, to study the reason of deviation between the simulated and experimental results of reflection. In addition, elastic modulus of the films was measured using nanoindentation method using AFM (Contact mode) and the results compared to bulk value. General increasing in the reflection as the film thickness increased and decrease in the reflection as the wavelength increased was observed. At lower film thickness, 10 nm, the film had very low reflection compared to other films. After comparison between the experiments and the simulation results, it appears that deviation between them increase as the film thickness decrease and the topography of the metal surface is the reason behind that. Finally, elastic modulus of the films were determined and it shows that there is decrease in the films modulus and sharp decrease at 50 nm film thick.