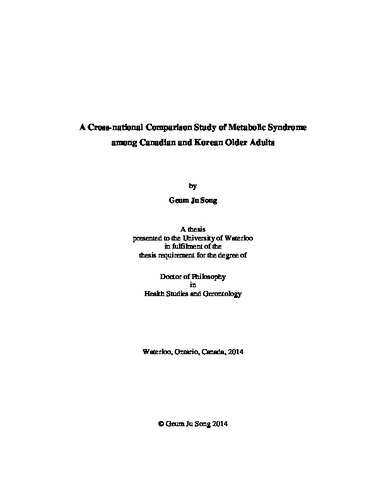 Background: Metabolic syndrome (MetS) is a clustering of traditional cardiovascular risk factors including central obesity, dyslipidemia, insulin resistance, and hypertension. The prevalence of MetS increases risk of cardiovascular disease and type 2 diabetes and increases with age. Purpose: To compare prevalence and correlates of MetS (and components) in Canadian and Korean older adults. Methods: This study consisted of secondary data analysis, using data from the Canadian Health Measures Survey (CHMS) (cycle 1) and the Korea National Health and Nutrition Examination Survey (cycle 4). The study sample included adults aged 60 to 79 years and who provided fasting blood samples. To compare prevalence of MetS between countries, the same diagnostic criteria (Harmonizing definition) were used. Similar measures of potential explanatory variables for MetS, such as physical activity, dietary patterns, comorbidity, gender, household income adequacy, education, marital status, alcohol consumption, smoking, psychological distress, and duration of sleep were also used where possible. Univariate and multiple logistic regression models were used to examine the cross-sectional relationship between these study variables and MetS. Principal component and cluster analyses were conducted to derive dietary patterns. Results: Included were 550 (weighted N=4,886,039) and 3,040 (weighted N=4,267,182) Canadians and Koreans aged 60 to 79 years, respectively. The prevalence of MetS was 42.0% and 52.2% in the Canadian and Korean sample, respectively (p<.0001). The prevalence of MetS in Korean women was 60.5% and explained the overall increased prevalence in the Korean sample. Results of the descriptive analysis, as well as the univariate and multiple logistic regression analyses indicated that the prevalence and pattern or joint distribution of explanatory variables differed across the two populations. In the Canadian sample, the final multivariate model comprised household income, marital status, alcohol consumption and psychological distress, with evidence of an interaction between adequacy of household income and marital status. In the Korean sample, the final multivariate model comprised comorbidity, gender, education, marital status, physical activity, and dietary pattern, with evidence of an interaction between comorbidity and marital status and between gender and education. Conclusions: Findings of this study provided insight into possible underlying mechanisms that might lead to between-country differences in prevalence of MetS and to inconsistent measures of association between MetS and an individual factor like physical activity or dietary intake across studies.