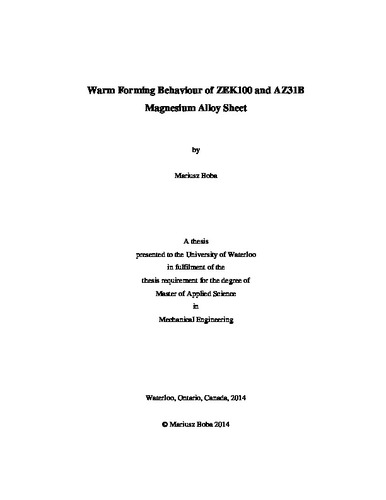 The current research addresses the formability of two magnesium sheet alloys, a conventional AZ31B and a rare earth alloyed ZEK100. Both alloys had a nominal thickness of 1.6 mm. Both Limiting Dome Height (LDH) and Cylindrical Cup Draw experiments were performed between room temperature and 350°C. To examine the effect of sheet directionality and anisotropy, LDH experiments were performed in both the sheet rolling and transverse directions. In addition, strain measurements were performed along both sheet orientations of the cylindrical cup and LDH specimens for which the geometry is symmetric. The LDH tests were used to study the formability of ZEK100 and AZ31B (O and H24 tempers) magnesium alloy sheet between room temperature and 350°C. At room temperature, AZ31B-O and AZ31B-H24 exhibit limited formability, with dome heights of only 11-12 mm prior to the onset of necking. In contrast, the dome heights of ZEK100 at room temperature reached 29 mm (a 140% improvement over AZ31B). Increasing the temperature above 200°C did not affect the relative ranking of the three sheet samples, however it did reduce the magnitude of the difference in dome heights. The rare earth alloyed ZEK100 had pronounced benefits at intermediate temperatures, achieving an LDH of 37 mm at 150°C; this dome height was only reached by AZ31B at a much higher temperature of 250°C. To further characterize the formability of ZEK100, forming limit curves (FLCs) were developed from the LDH tests in both the rolling and transverse directions. Comparisons to AZ31B were made at selected temperatures. Surface strain data was collected with an in situ digital image correlation (DIC) system incorporating two cameras for stereo observation. Results from these experiments further highlighted the enhanced formability relative to AZ31B over the entire temperature range between room temperature and 350°C, with the most dramatic improvements between room temperature and 150°C. The plane strain forming limit (FLC0) for ZEK100 at 150°C was 0.4 which equals that of AZ31B at 250°C. At higher temperatures (300°C), the two alloys exhibited similar performance with both achieving similar dome heights at necking of 37 mm (AZ31B) and 41 mm (ZEK100). To round out the investigation of ZEK100 for industrial applications, cylindrical cup deep drawing experiments were performed on ZEK100 sheet between 25°C and 250°C under isothermal and non-isothermal conditions. Draw ratios of 1.75, 2.00 and 2.25 were considered to examine the effects of draw ratio on draw depth. The effect of sheet anisotropy during deep drawing was investigated by measuring the earring profiles, sheet thickness and strain distribution along both the rolling and transverse directions. Isothermal test results showed enhanced warm temperature drawing performance of ZEK100 over AZ31B sheet; for example, a full draw of 203.2 mm (8”) blanks of ZEK100 was achieved with a tool temperature of 150°C, whereas a tool temperature of 225°C was needed to fully draw AZ31B-O blanks of this diameter. Non-isothermal deep draw experiments showed further improvement in drawability with significantly lower tooling temperatures required for a full cup draw using ZEK100. ZEK100 achieved a full draw of 228.6 mm (9") blanks with a die and blank holder temperature of 150°C and a cooled punch (25°C) while the same size blank of AZ31B required a die and blank holder temperature 225°C and a cooled punch (150°C). Temperature process windows were developed from the isothermal and non-isothermal results to show a direct comparison of drawing behaviour between ZEK100 and AZ31B. Overall, ZEK100 offers significantly improved forming performance compared to AZ31B, particularly at temperatures below 200°C. This lower temperature enhanced formability is attractive since it is less demanding in terms of lubricant requirements and reduces the need for higher temperature tooling.