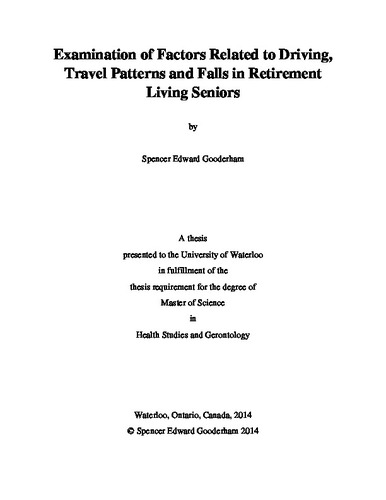 Introduction: To date, there has been little research on driving or transportation use in retirement living seniors or the associations with quality of life, including staying active, socially engaged and connected with the outside community. This thesis is part of a larger project being conducted by a team of researchers at the University of Waterloo to examine these issues in collaboration with the Schlegel-UW Research Institute for Aging, the Schlegel Villages and Luther Village on the Park. Purpose: The primary objectives of this thesis were to: 1) examine the actual driving practices and other modes of travel in relation to functional abilities and other characteristics; 2) examine associations between driving and other modes of travel with community engagement; 3) examine fall status and compare fallers and non-fallers; and 4) compare current drivers to a sample of former drivers with respect to falls, balance confidence, depression, activity levels in and out of Village (engagement) and travel patterns. Methods: A convenience sample of 55 drivers (mean age 81.9 ± 6.2, 49% male) from five retirement villages located in Southern Ontario were assessed between February and October, 2013. Participants completed questionnaires (background and driving history, activities inside and outside the village), scales (depression, well-being, self-reported driving restrictions, perceived driving abilities, balance and driving confidence) and assessments of cognition and executive function, lower body mobility and contrast sensitivity. In addition, participant vehicles were equipped with two electronic data logging devices (vehicle diagnostics and GPS) for two weeks, while they concurrently kept trip logs (for driving trips) and travel diaries (for non-driving trips). Falls were assessed through both self-report and incident reports from the villages. Similar data (from scales, questionnaires, travel diaries, falls) previously collected on a sample of 20 former drivers from these retirement villages was merged into the database to permit statistical comparisons between current and former drivers. Primary Results: Overall, the sample reported driving less after moving to the villages. Compared to prior studies with community seniors, older drivers living in the retirement villages had more restricted driving practices. Residents who were considering driving cessation were not only restricting their driving, but had diminished functional abilities, were more likely to fall, had worse balance and driving confidence, and were less engaged with the community. Compared to current drivers, former drivers were more likely to have fallen in the past year, had lower balance confidence, and were less active outside the village, although they were equally socially engaged. Level of independent living (townhomes versus apartments or suites, versus assisted living rooms) emerged as a significant predictor of community engagement. When level of independent living was controlled for, greater community engagement was associated with younger age, being able to walk 1/4 mile and better balance confidence scores. Driving status approached significance with higher community engagement scores associated with being a current (versus former) driver. Conclusions: The results indicate that although residents of retirement villages may not drive as much as community living seniors, continuing to drive enables them to stay more connected to the broader community. Although few had considered driving cessation prior to relocation, about half the sample were now considering this transition. Retirement living may make the transition to driving cessation easier, particularly for those who take advantage of village shuttle buses and retain the ability to walk to shops and services in the area. Alternate modes of transportation are critical as older adults retire from driving to ensure continued mobility and independence, as well as to maintain productive community and social engagement.