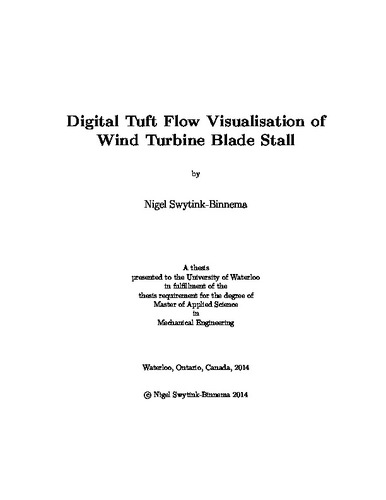 Wind turbines installed in the open atmosphere experience much more complex and highly-varying flow than their counterparts in wind tunnels or numerical simulations. In particular, aerodynamic stall—which occurs often on stall-regulated wind turbines in such variable flow conditions—can affect both wind turbine blade lifespan and noise generation. A field test site was therefore installed at the outer limits of the city of Waterloo, Ontario to study a small-scale 30 kW stall-regulated wind turbine. Experimental equipment was installed to monitor parameters such as wind speed and direction, electrical power output, blade pitch angle, rotor rotational speed, and wind turbine yaw orientation. Extensive hardware and software was developed and installed to wirelessly collect data from all instrumentation. Tufts and a remote-operated camera were also installed on one of the two blades of the 10 m diameter horizontal-axis turbine. In a variation on the tuft ﬂow visualisation technique, video ﬁles were analysed using a novel digital image processing code. The code was developed in MATLAB to calculate the fraction of the blade which was stalled by determining the position and angle of each tuft in every video frame. The algorithm was able to locate on average 85% of the visible tufts and correctly tagged those which were stalled with a bias of only −5% compared to the typical manual method. When the algorithm was applied to 7 h of tuft video at the outboard 40% of the blade, the total average fraction of stalled tufts varied from 5% at 5 m/s to 40% at 21 m/s. This trend was expected for the stall-regulated design since, as the wind speed is increased, the stall progresses from inboard to outboard regions and from trailing edge to leading edge. The 7 h time period represents at least a two order-of-magnitude increase compared with time periods analysed using previous manual methods. This work has demonstrated a digital implementation of tuft ﬂow visualisation which lends statistical validity (through long-time-period averaging) to a common tool for researching wind turbine stall. The speed and ease with which the tuft method can be implemented, combined with the high cost per energy of small-scale wind turbines, suggest that this digital algorithm is a highly beneficial tool for future studies.