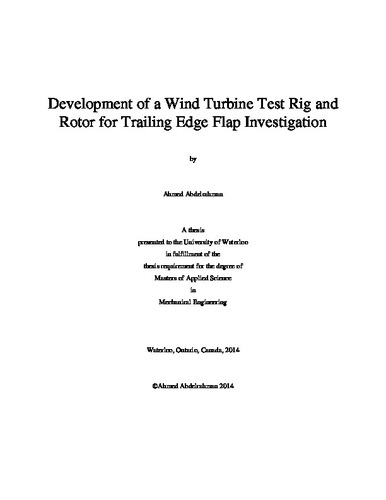 Alleviating loads on a wind turbine blades would allow a reduction in weight, and potentially increase the size and lifespan of rotors. Trailing edge flaps are one technology proposed for changing the aerodynamic characteristics of a blade in order to limit the transformation of freestream wind fluctuations into load fluctuations within the blade structure. An instrumented wind turbine test rig and rotor were developed to enable a wide-range of experimental set-ups for such investigations. The capability of the developed system was demonstrated through a study of the effect of stationary trailing edge flaps on blade load and performance. The investigation focused on measuring the changes in flapwise bending moment and power production for various trailing edge flap parameters. The blade was designed to allow accurate instrumentation and customizable settings, with a design point within the range of wind velocities in a large open jet test facility. The wind facility was an open circuit wind tunnel with a maximum velocity of 11m/s in the test area. The load changes within the blade structure for different wind speeds were measured using strain gauges as a function of flap length, location and deflection angle. The blade was based on the S833 airfoil and is 1.7 meters long, had a constant 178mm chord and a 6o pitch. The aerodynamic parts were 3D printed using plastic PC-ABS material. The total loading on the blade showed higher reduction when the flap was placed further away from the hub and when the flap angle (pitching towards suction side) was higher. The relationship between the load reduction and deflection angle was roughly linear as expected from theory. The effect on moment was greater than power production with a reduction in moment up to 30% for the maximum deflection angle compared to 6.5% reduction in power for the same angle. Overall, the experimental setup proved to be effective in measuring small changes in flapwise bending moment within the wind turbine blade.