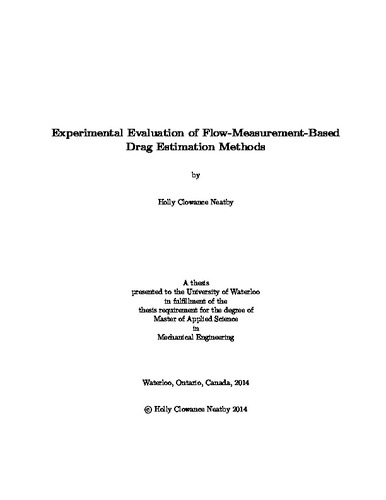 The accuracy of existing methods for estimating the drag based on experimental flow field measurements were assessed for two-dimensional bodies. The effects of control volume boundary placement and inherent simplifying assumptions were also investigated. Wind tunnel experiments were performed on a circular cylinder operating at a Reynolds number of 8,000 and 20,000, and on a NACA 0018 airfoil operating at a chord Reynolds number of 100,000 for three angles of attack (α), specifically, 5◦, 10◦, and 15◦. The circular cylinder experiments fall within the the shear layer transition flow regime. Airfoil investigations span both types of flow development common to low Reynolds number airfoil operation. For α = 5◦ and 10◦, a separation bubble forms on the upper surface of the airfoil, while, for α = 15◦, the flow separates without reattaching, resulting in a stalled airfoil. Wake velocity and pressure measurements were performed at several downstream locations to investigate the impact of control volume boundary placement. Wake profiles were measured between 3 and 40 diameters downstream from the circular cylinder axis and between 1 and 4.5 chord lengths from the trailing edge of the airfoil. In addition to wake profiles, the outer flow velocity variation was quantified to investigate the appropriate location to measure freestream flow characteristics in a test section with streamwise-varying outer flow conditions. The results show that drag estimates are strongly dependent on the streamwise position of the measured wake profile for all methods investigated. Drag estimates improved, and streamwise variation decreased, with increasing streamwise position of the flow measurements. For the pressure based method examined, wake measurements should be taken at least 10 times the projected model height downstream of the model. In the case of the circular cylinder, this is equivalent to 10 diameters and, for the airfoil investigated, it is approximately 1 chord length from the trailing edge. For the methods relying on velocity measurements, acceptable estimates of drag were possible when based on measurements taken at least 30 projected heights downstream, i.e., 30 diameters for the circular cylinder and 3 chord lengths for the airfoil model investigated. The findings highlight the importance of providing a detailed description of the methodology and experimental implementation for drag estimates based on flow field measurements. Finally the study offers guidelines for implementing momentum integral based drag calculations in future investigations.