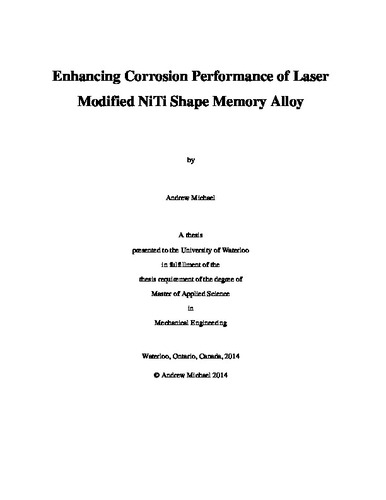 Laser processing of NiTi shape memory alloys (SMA) has been identified as having great potential in surface treatment, welding, and novel performance requirement applications. However, discrepancies arise regarding whether laser processing improves or degrades the corrosion performance of NiTi-based SMAs. This is a cause for concern over the reliability of the laser processed surfaces. Prior to full scale implementation, a better understanding of oxide evolution during laser processing is required. The first part of this study concerned a systematic investigation of the surface of Ni-44.2 wt.% Ti SMA after the application of differing amounts of laser pulsing and thus energy input. Specific focus was directed on characterizing local changes in the surface oxide adjacent to laser spots. The sample local electrochemical characteristics were investigated by scanning electrochemical microscopy (SECM). The effect of laser processing on the regeneration kinetics of the redox-active mediator was analyzed through microelectrode current maps and approach curves in the feedback mode. Raman spectroscopy was used to determine the crystallinity of the oxide and potentiodynamic cyclic polarization was used to determine oxide stability. Results showed that for a small number of pulses (i.e. low total energy input) corrosion performance was determined primarily by topographical effects. However, increasing the number of pulses (i.e. higher total energy input) had a significant impact on the stability of the oxide in the heat-affected zone (HAZ) region due to the increase in crystallinity, which dictated where the corrosion initiated. In the second part of this study, post-process surface treatments that could be applied to NiTi SMA after laser processing were systematically investigated. Specific focus was directed at characterizing the crystallinity of the newly formed oxides and the stability across the entire surface (containing laser-processed regions and retained base material). Raman spectroscopy and potentiodynamic cyclic polarization were used for this analysis. Results showed that the post-process surface treatments successfully restored the corrosion performance to pre-laser-processing conditions by eliminating crystallinity in the surface oxide and reducing inhomogeneity across the surface.