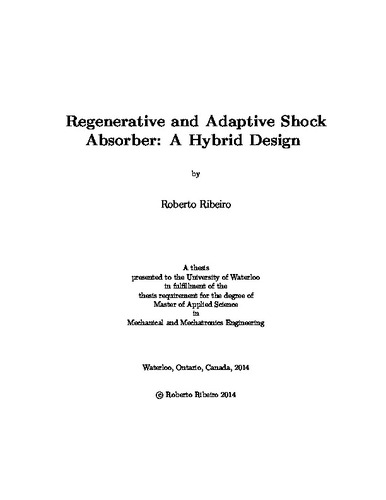 Damping in a multitude of engineering applications has a variable threshold requirement based on the input excitation given to the system. In most applications the desired system response is known but the input to the system is a time dependent function with fluctuating amplitudes and frequencies. Therefore for optimal performance the damping characteristics of a given system must be able to adapt to increase or decrease the amount of energy being absorbed by the system. In most mechanical systems (including vehicles) damping is achieved through a viscous medium; such as hydraulic oil. Although the oil is capable of absorbing the unwanted energy in the system, its passive nature limits its ability to achieve an optimal amount of damping given the excitation. To achieve the requisite functionality of variable damping; a multitude of solutions have been implemented, proposed, and evaluated at both commercial and academic research levels. These solutions have met the variable damping requirements but have significant cant drawbacks associated with them. To address the shortcomings associated with the aforementioned variable damping solutions, a hybrid design consisting of a conventional hydraulic damper and a linear motor topology was fused together to produce a hybrid variable damper. In this hybrid design, the oil in the system acts as bias and the linear motor topology allows for variability in the amount of damping being provided to the system. This hybrid design allows for the requisite variable damping requirement to be achieved. In addition to the hybrid design being able to achieve variable damping, it has the capacity to act as a generator and also provide fail-safe operation due to the viscous bias. Through analytical, FEM analysis and experimental modeling the hybrid damper has been characterized and with a high level of agreement between the various results. This work has also shown that the design is capable of achieving variable damping with the capacity to recover energy from the system.