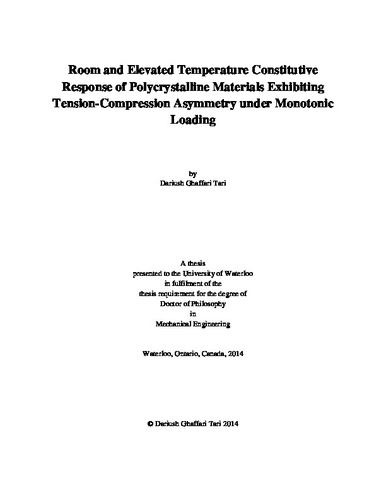 A continuum plasticity yield function is developed that captures tension/compression asymmetry and its evolution as exhibited by HCP materials such as magnesium alloy sheet. The model, referred to herein as “CPB06ex3ev”, is based upon the CPB06 [1] yield surface which is extended in this research to consider evolution of asymmetry and anisotropy under monotonic loading. The model is further modified to incorporate thermal softening and strain rate effects. Mechanical characterization experiments are performed to acquire uniaxial tensile and compressive stress-strain data along a range of in-plane and through-thickness loading orientations. Experiments are performed for a range of strain rates (0.001-1s-1) and temperatures (23-250°C). A strong, evolving asymmetry is observed at room temperature when comparing tensile and compressive flow stresses and r-values, while asymmetry and anisotropy are reduced dramatically as temperature is increased. AZ31B exhibits moderate strain rate sensitivity at room temperature, however, the rate sensitivity increases with temperature. The CPB06ex3ev model is applied to simulate AZ31B magnesium alloy sheet. An error minimization scheme is used to fit the yield function and evolution coefficients over the entire data set. The calibrated model is shown to capture the evolving asymmetric/anisotropic response of both flow stresses and r-values in tension and compression, while also fitting the flow stress at the biaxial tension and pure shear locations on the yield locus. The model, which uses three stress transformations, is implemented within a user defined material model (UMAT) and linked to the commercial finite element software LS-DYNA. In order to assess the finite element implementation of the CPB06ex3ev model, a series of validation experiments were performed and corresponding finite element models were developed: (i) room temperature three-point bending; (ii) elevated temperature (250°C) limiting dome height experiments; and, (iii) warm cup drawing experiments. The three point bend simulations demonstrated the importance of capturing material asymmetry and the associated shift in neutral axis. Comparison between the warm forming experiments and models revealed qualitative agreement between the predicted punch load-displacement and strain distributions. The CPB06ex3ev formulation was able to capture the anisotropy trends in terms of the differences in strains measured along the sheet rolling versus transverse directions. Beyond the constitutive characterization and modeling effort, the cup draw formability experiments have provided interesting insight into the effect of temperature and temperature distribution within the AZ31B sheet. The current work has served to show the existence of a process window in which the blank center temperature must lie below the die temperature but above the temperature for activation of non-basal slip systems (to avoid low temperature fracture). Two modes of failure have been identified at the process window boundaries in which the cup either fractures due to low temperature (brittle) failure or a high temperature (necking) failure.