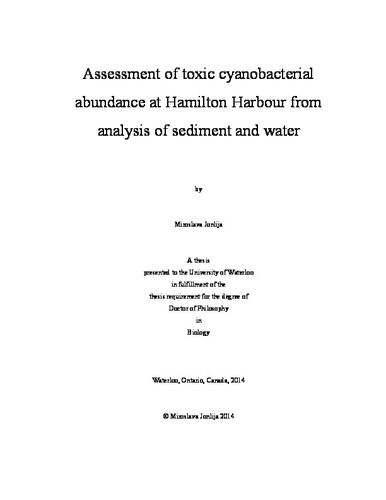 The western embayment of Lake Ontario, Hamilton Harbour, is one of the most polluted sites in the Laurentian Great Lakes and in recent years has seen a reoccurrence of cyanobacterial blooms. This study uses a multidisciplinary approach to examine the presences of toxic Cyanobacteria in the harbour in order to gain insight into these recurrent blooms. Microscopic analyses of phytoplankton samples collected during the 2009 summer-fall sampling season from two locations within the harbour showed the spatial and seasonal diversity of the contemporary cyanobacterial community. Microcystis colonies relative abundances in relation to total algal numbers were estimated. The lowest and highest relative abundances of Microcystis in the phytoplankton population were 0.6% and 9.7%, respectively, and showed seasonal variability between stations. Fourteen cyanobacterial genera comprising six families and three orders were identified and for which the most abundant filamentous genera during the summer-fall sampling season were Planktothrix, Aphanizomenon and Limnothrix. Potential microcystin producers Microcystis, Planktothrix, Aphanizomenon and Dolichospermum were also present and during the sampling period Microcystis was recorded at both stations on all dates, however, its relative abundance was below 10 % throughout the study period. The composition and abundance of filamentous cyanobacteria were observed to be positively statistically correlated to water quality environmental parameters dissolved nitrates (NO3/NO2), dissolved inorganic carbon (DIC), and conductivity. Redundancy analysis (RDA) found that 53.35% total variance of Aphanizomenon was correlated to low water column NO3/NO2 and conductivity, and higher water column DIC. 58.13% of the relative abundance of Planktothrix was correlated to high concentrations of dissolved nitrates, while 51.69% of total variance of Limnothrix was correlated to higher DIC and lower water column dissolved nitrate concentrations. Information about past cyanobacterial communities was obtained from the sediment core analysis, using paleolimnological and modern molecular methods. The age of the 100.5 cm long sediment core retrieved from the deepest part of Hamilton Harbour was established to be 140 years (1869-2009), using the Constant Rate of Supply (CRS) 210Pb age model. This age was not sufficient to provide information of harbour’s environmental conditions, presence of the blooms, and triggers for their occurrence before European settlement in the area. Results of the HPLC analysis of fossil pigments indicated that the dominant members of the algal community have not changed over the 140 years and that cyanobacteria were regular members of the phytoplankton community. The composition of the major chlorophyll pigments indicated high presence of Chlorophyta and Bacillariophyta in the harbour at all times. The main algal groups identified on the basis of marker pigments presence, besides the Chlorophyta and Bacillariophyta, were the Dinophyta and the Cryptophyta. The presence of a scytonemin derivative, compound B, indicated that cyanobacterial blooms were occurring in past, before the first officially recorded blooms in the 1960s. Cyanobacterial pigments presence indicated that Cyanobacteria have been a regular but not dominant feature of Hamilton Harbour phytoplankton in the past. To our knowledge, this study is the first one examining fossil pigments from Hamilton Harbour. Results of the PCR-DGGE molecular analysis of 16S rRNA-V3 gene fragments from sedimentary DNA revealed the presence of thirteen cyanobacterial genotypes. The temporal change in the cyanobacterial community composition was indicated by the increasing number of species over time, from the oldest to the most recent sediment layers. The deepest sediment strata showed the lowest number (two bands) and intensity of bands. The most recent sediment layer had the greatest numbers (11) and intensity of bands. This increased diversity indicated changing environmental conditions in the harbour, primarily nutrient pollution and worsening water quality. Results of the PCR-DGGE molecular analysis of mcyE-AMT gene fragments showed that Microcystis aeruginosa and Planktothrix rubescens were two microcystin producers present in Hamilton Harbour over the last 80 years. The persistent presence and resilience of these two genera indicated a more serious and longer-term issue of toxic blooms than previously recognized. Historical records show that noticeable anthropogenic impact on Lake Ontario environment has been measurable since the 1780s, the first dramatic impact on the Lake Ontario watershed was evident from the mid1880s, the earliest evidence of eutrophication in the lake occurred between 1820 and 1850, while human induced environmental changes in Hamilton Harbour date back ca. 350 years. In the 1960s, cyanobacterial blooms were first officially recognized in the harbour and the lower Great Lakes. The present research is the first report of the mcyE module and AMT domain of microcystin genes being amplified from sediment of North American lakes, and showed that toxic Cyanobacterial have been regular members of Hamilton Harbour phytoplankton community for almost a century. This research considerably deepened the knowledge of the past toxic cyanobacterial blooms in Hamilton Harbour and their possible causes. It also showed that in the absence of historical records, both the PCR-DGGE method and the mcyE-AMT gene may be used for reconstruction of the past toxic blooms not only in the Laurentian Great Lakes, but also in other aquatic regions of the world impacted by toxic cyanobacterial blooms. Also, it demonstrated the utility of the combined molecular and paleolimnological analyses, which might become a useful tool in the determination of the bloom causes factors and in the mitigation of the future production of toxic blooms.