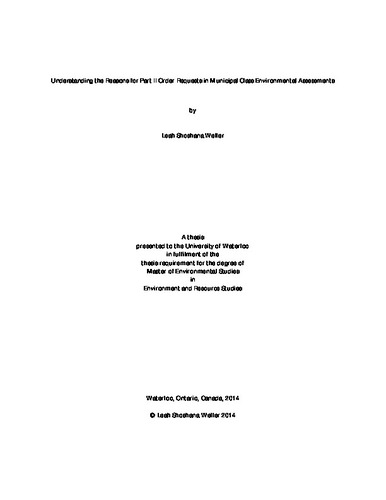 The practice of environmental assessment (EA) in Ontario, Canada and elsewhere has been criticized for resulting in projects that are not necessarily “good” for the environment or society, but simply “less bad.” In Ontario, the ongoing erosion over time of meaningful public involvement in the EA process is seen as a major reason for the degradation of EA practice from something closer to its idealistic purpose of creating “sustainable” development down to its current state, as many have suggested, as an administrative process to ensure legislated minimum requirements (for action or outcome) are met. Nonetheless, the EA process in Ontario continues to offer one of the best legislated processes available for addressing the potential negative impacts associated with public projects in the province. Ontario’s streamlined Class EA process allows for routine, low-impact public projects to proceed without ministerial review so long as certain minimum standards for technical review and public consultation are met. It also includes a mechanism for stakeholders to request ministerial review should a stakeholder believe a substantive or procedural error or oversight has occurred during the study. This mechanism, called a Part II Order request, has been invoked in recent years for multiple reasons in addition to correcting substantive or procedural errors or oversights. This research asks why stakeholders request Part II Orders. Through review and coding of Part II Order request letters from various projects across Ontario, and conducting detailed case studies of projects for which Part II Order requests were made in the Greater Toronto Area, it was determined that the two most commonly-found issues in the Part II Order letters were related to stakeholders feeling distrustful of the proponent or the EA process, and stakeholders feeling as though they were not adequately engaged in public consultation activities for the EA study. The case studies examined these themes in greater detail, and found that these two issues were intertwined with issues of stakeholder power and control. The research findings suggest that EA outcomes can be improved by altering public consultation activities to provide stakeholders with greater control over the decision-making process in a transparent manner so that stakeholders are aware not only of the perspectives of the proponent, but also those of other stakeholders.