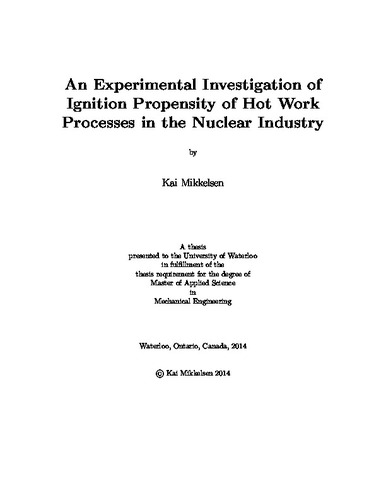 The National Fire Code of Canada (NFCC) is one model code which regulates hot work in Canada. The code specifies that hot work processes need only create heat to be considered hot work processes, and requires that precautions taken adhere to those in Canadian Standards Association (CSA) W117.2, which is intended for welding, cutting and allied processes. CSA W117.2 requires a 15 m spherical radius of separation in which combustibles are ideally relocated or, at minimum, be protected with fire blankets. Openings, cracks and other locations in which sparks or hot particles must also be protected within this distance. Additionally CSA W117.2 requires a fire watch during, and one hour following the completion of the work. The NFCC stipulates more stringent requirements on the fire watch than CSA W117.2, requiring a check back 4 hours after the work. The code in its current form requires the same precautions be taken when using a soldering iron or epoxy resin as when using an oxyacetylene torch to flame cut steel. The lack of hazard characterization of hot work processes, and the umbrella prescription of required fire safety precautions can result in insufficient measures to prevent fires in some scenarios, and inordinate precautionary measures in others. While not applicable law in all jurisdictions, the NFCC is relied on in various Canadian industries for regulative purposes. Nuclear power generation in Canada is one such industry facing onerous fire protection costs resulting from following these precautions for the smallest of jobs requiring heat producing tools. The literature review highlights the dearth of scientific knowledge regarding the propensity of hot work as an ignition source and how this shortcoming manifests itself in issues across the various standards governing hot work practices. The objective of this research is to assess fire hazards resulting from various processes considered hot work under the National Fire Code of Canada (NFCC). Due to the breadth of processes covered by the NFCC, a spectrum of hot work activities was investigated from processes as innocuous as the application of heated adhesive, to well known sources of ignition such as a variety of welding processes, oxyacetylene cutting and plasma cutting. To streamline the hazard assessment, processes were categorised into three groups based upon expected hazards such that testing could focus on the most prominent ignition danger presented by each. The groups were those processes exhibiting hot surface ignition hazards, processes with hot surface ignition hazards in addition to limited potential to generate hot particles, and those processes in which the generation of significant quantities of spark and hot particles is guaranteed. For the first two process categories, experimentation focused on determining a critical process temperature with which to rank processes and also compare with ignition temperatures of combustibles commonly involved in hot work fires. The critical process temperature was determined as the highest measured temperature of the workpiece or tool during the chosen process and was typically measured with the use of thermocouples and infrared thermography. Characterization of any hot particles in the second category was performed using infrared thermography, and in some cases, thermal paper. Literature sources indicated that sparks and hot particles are the largest factor in hot work fires, so specialised methodology was developed for the third category of processes to characterise the distribution of many thousands of hot work particles generated during welding, thermal cutting and other hot particle producing work. The distributions collected were used to determine the area enveloped by the ignition hazard of hot particles as well as areas encompassing the highest threat to combustibles in relative terms. Several of the processes as studied were found not to exhibit any measurable form of ignition hazard, including forms of manual sanding and filing and rotary filing of steel. Heated adhesive, cutting steel with a reciprocating saw and drilling of steel were shown to exhibit moderate degrees of hazard with temperature rise of 195\degree C or less, suggesting potential hazard to a limited group of combustibles. Welding and cutting processes were shown to have a relative ignition potential across a wide area. Typical welding procedures produced hot particles which travelled a maximum of approximately 3 - 4 m while thermal cutting processes ejected sparks, slag and hot particles up to 9.8 m from the work. Incorporated properly into updated standards and codes, the results and findings of this research could drastically improve the Canadian model codes regarding the regulation of hot work by decreasing cost and difficulty for Canadian Industry without increasing the risk of loss.