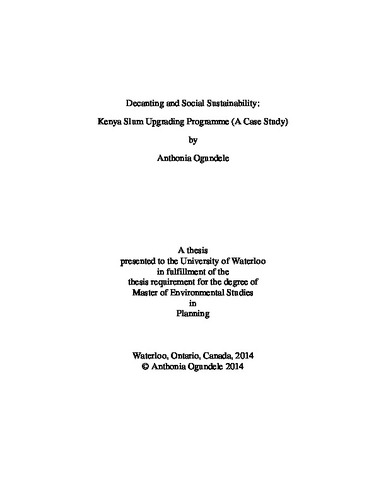 By the year 2030, over half of the global population will reside in cities. The impacts of this trend are most notable among nations within the global south, which are experiencing rapid urbanization, due to forced displacement, political, economic and environmental conditions. The infrastructure deficit, caused by rapid urbanization, experienced by most nations in the global south has created slum conditions for many of their urban residents. All levels of government including international diplomatic bodies have encouraged urban renewal programs that seek to resolve the “slum issue” in the global south. These urban renewal programs have been the subject of much criticism given the methods of redevelopment. The focus on improving the physical environment of slum dwellers and the limited attention to the resulting social consequences of such programs. The Kenya Slum Upgrading Program is a case study by which the method of redevelopment included the use of a decanting site which facilitated the temporary displacement of residents of the Kibera slum, Soweto East Village to a pre-constructed high-rise estate, until the redevelopment of the Soweto East Village is complete. Using Stren and Polèse’s concept of Social sustainability as a framework, this research seeks to understand the impacts of the use of a decanting site on the targeted community. The decanting site offered a space to understand a community in transition and critically understand the impacts of this method. The research found that social sustainability was impacted both positively and negatively within the decanting site. In fact, decanting sites are an opportunity to build social sustainability for a displaced community, instead of seeking to sustain its previous manifestation in Soweto East. The research also found that the driver for this program were international benchmarks, which may have impeded the ability for all stakeholders, at all levels, to consider the impacts of social sustainability. As we move into a global post- 2015 development framework these findings must be understood as a starting point to understanding the impacts of methods used to support large scale redevelopment programs.