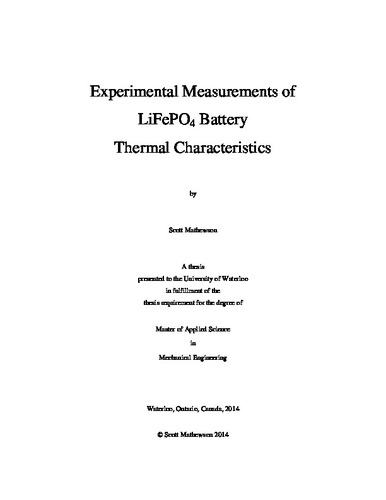 A major challenge in the development of next generation electric and hybrid vehicle technology is the control and management of heat generation and operating temperatures. Vehicle performance, reliability and ultimately consumer market adoption are integrally dependent on successful battery thermal management designs. It will be shown that in the absence of active cooling, surface temperatures of operating lithium-ion batteries can reach as high as 50 °C, within 5 °C of the maximum safe operating temperature. Even in the presence of active cooling, surface temperatures greater than 45 °C are attainable. It is thus of paramount importance to electric vehicle and battery thermal management designers to quantify the effect of temperature and discharge rate on heat generation, energy output, and temperature response of operating lithium-ion batteries. This work presents a purely experimental thermal characterization of thermo-physical properties and operating behavior of a lithium-ion battery utilizing a promising electrode material, LiFePO4, in a prismatic pouch configuration. Crucial to thermal modeling is accurate thermo-physical property input. Thermal resistance measurements were made using specially constructed battery samples. The thru-plane thermal conductivity of LiFePO4 positive electrode and negative electrode materials was found to be 1.79 ± 0.18 W/m°C and 1.17 ± 0.12 W/m°C respectively. The emissivity of the outer pouch was evaluated to enable accurate IR temperature detection and found to be 0.86. Charge-discharge testing was performed to enable thermal management design solutions. Heat generated by the battery along with surface temperature and heat flux at distributed locations was measured using a purpose built apparatus containing cold plates supplied by a controlled cooling system. Heat flux measurements were consistently recorded at values approximately 400% higher at locations near the external tabs compared to measurements taken a relatively short distance down the battery surface. The highest heat flux recorded was 3112 W/m2 near the negative electrode during a 4C discharge at 5 °C operating temperature. Total heat generated during a 4C discharge nearly doubled when operating temperature was decreased from 35 °C to 5 °C, illustrating a strong dependence of heat generation mechanisms on temperature. Peak heat generation rates followed the same trend and the maximum rate of 90.7 W occurred near the end of 5 °C, 4C discharge rate operation. As a result, the maximum value of total heat generated was 41.34 kJ during the same discharge conditions. The effect of increasing discharge rate from 1C to 4C caused heat generation to double for all operating temperatures due to the increased ohmic heating. Heat generation was highest where the thermal gradient was largest. The largest gradient, near negative electrode current collector to external tab connection and was evaluated using IR thermography to be 0.632 °C/mm during 4C discharge with passive room temperature natural convection air cooling. Battery designs should utilize a greater connection thickness to minimize both electrical resistance and current density which both drive the dominant mode of heat generation, ohmic heating. Otherwise cooling solutions should be concentrated on this region to minimize the temperature gradient on the battery.