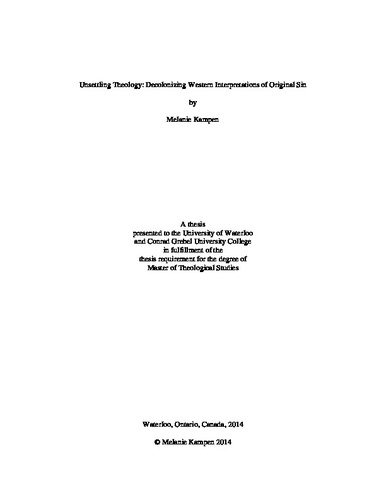 For Native peoples, becoming Christian in north america has also meant becoming white. That is, the theological beliefs, cultural habits, and political movements that characterized american colonialism are inseparable. Among its many shortcomings throughout colonial history, Western Christianity has failed on a basic, epistemological level; it has failed to recognize itself as a particular theological tradition, instead positing itself as a universal. The insistence of the particular theological doctrines and scriptural interpretations of european settlers as Truth led to the demise of many Others—a violence to which the Indigenous peoples of this land attest. If, as I have suggested, particular theologies were part and parcel of the western colonial project, then it follows that attempts at disarming the imperial machine must not only involve decolonizing dominant politics and cultural habits, but also decolonizing dominant western theologies. This thesis takes up one of the dominant doctrines in Western Christianity, that of original sin. An analysis of this doctrine is pertinent because, in addition to articulating the dominant western Christian understanding of sin, death, and evil, in the world, it also reveals an undergirding anthropology and an implied soteriology, both of which provided justifications for the genocide on the Indigenous peoples of america. Following the decolonizing methodologies of Native americans Andrea Smith and Laura Donaldson, I will demonstrate that the doctrine is particular, both scripturally and culturally, and that the dominant reading of the supporting texts for the doctrine are neither universal nor necessary. Then I will interrogate the two primary texts, Genesis 3 and Romans 5 with alternative interpretations from Native theologians and the experiences of the doctrine by Native peoples. Finally, I will argue that if western theology is to truly release its monopoly on the Truth, even what it claims to be the True discourses and interpretations within Christianity, it must make itself vulnerable to deconstruction and interrogation by those it has oppressed; it must cultivate a posture of receptivity to the other and Native interpretive approaches, begin the hard work of unsettling settler theologies, and composing non-dominant readings of the bible.