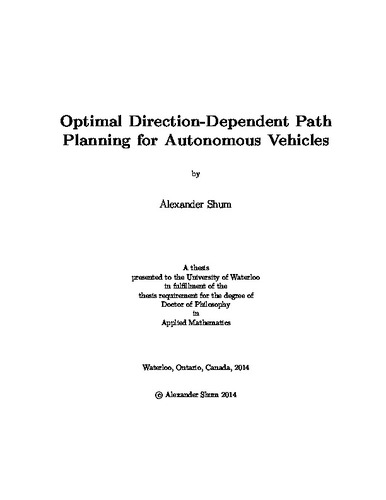 The focus of this thesis is optimal path planning. The path planning problem is posed as an optimal control problem, for which the viscosity solution to the static Hamilton-Jacobi-Bellman (HJB) equation is used to determine the optimal path. The Ordered Upwind Method (OUM) has been previously used to numerically approximate the viscosity solution of the static HJB equation for direction-dependent weights. The contributions of this thesis include an analytical bound on the convergence rate of the OUM for the boundary value problem to the viscosity solution of the HJB equation. The convergence result provided in this thesis is to our knowledge the tightest existing bound on the convergence order of OUM solutions to the viscosity solution of the static HJB equation. Only convergence without any guarantee of rate has been previously shown. Navigation functions are often used to provide controls to robots. These functions can suffer from local minima that are not also global minima, which correspond to the inability to find a path at those minima. Provided the weight function is positive, the viscosity solution to the static HJB equation cannot have local minima. Though this has been discussed in literature, a proof has not yet appeared. The solution of the HJB equation is shown in this work to have no local minima that is not also global. A path can be found using this method. Though finding the shortest path is often considered in optimal path planning, safe and energy efficient paths are required for rover path planning. Reducing instability risk based on tip-over axes and maximizing solar exposure are important to consider in achieving these goals. In addition to obstacle avoidance, soil risk and path length on terrain are considered. In particular, the tip-over instability risk is a direction-dependent criteria, for which accurate approximate solutions to the static HJB equation cannot be found using the simpler Fast Marching Method. An extension of the OUM to include a bi-directional search for the source-point path planning problem is also presented. The solution is found on a smaller region of the environment, containing the optimal path. Savings in computational time are observed. A comparison is made in the path planning problem in both timing and performance between a genetic algorithm rover path planner and OUM. A comparison in timing and number of updates required is made between OUM and several other algorithms that approximate the same static HJB equation. Finally, the OUM algorithm solving the boundary value problem is shown to converge numerically with the rate of the proven theoretical bound.