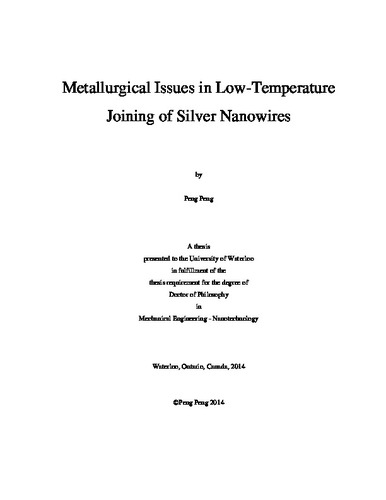 Silver nanowires (Ag NWs) have a wide range of applications in the electronic industry and are attracting growing world-wide interest because of their unique thermal, chemical, electrical and mechanical properties. Understanding of mechanical properties of Ag NWs and joining processes for them at a nano scale is urgently needed to support exploitation of their applications. Particularly, study of processing-structure-property relationships is of much significance. In the present thesis, the following research works were conducted. Ag NWs were synthesized using the polyol method. Joining of individual Ag NWs in an end-to-end orientation at room-temperature without assistance of external pressure was investigated. Selective surface activation of Ag NWs provided surface free of protective organic layers for metallurgical joining. A similar crystal orientation was maintained between the NWs, and diffusion along the boundary contributed to the nanojunction formation. Monocrystalline V-shaped or zig-zag silver prisms were formed after nanojoining, terminated by twin boundaries and free surfaces. The feasibility of room-temperature pressure-free joining of copper (Cu) substrates using Ag NW paste was conducted and demonstrated for flexible electronic packaging applications. The organic content in water-based Ag NW pastes was largely reduced by a repeated washing process to decrease the joining temperature. The formation of end-to-side or side-to-side joints between Ag NWs was observed concurrently with those joined end-to-end. The mechanical and electrical properties of Ag NW joints were examined. It was found that self-generated local heating within the Ag NW paste and Cu substrate system promoted the joining of Ag-to-Ag and Ag-to-Cu without any external energy input. The localized heat energy could be delivered in-situ to the interfaces and promoted atomic diffusion and metallic bond formation while the bulk component temperature maintaining near room-temperature. The organic layer on the side surfaces of the Ag NWs could be broken down through consumption of the residual PVP by a CuO-PVP reaction and which produced localized heating, increasing activated surface sites dramatically and making three-dimensional networks feasible. Ag NWs were introduced into Ag nanoparticle (NP) matrices joined at low-temperature. Joining was facilitated by solid state sintering of the Ag nanomaterials and metallic bonding at Cu-Ag interfaces. It was found that Ag NWs in a Ag NP matrix acted as a second reinforcement phase. In addition to improving the fracture toughness of joints, the introduction of Ag NWs affected the path of fracture propagation, where necking, breakage and pullout of Ag NWs occurred during loading.