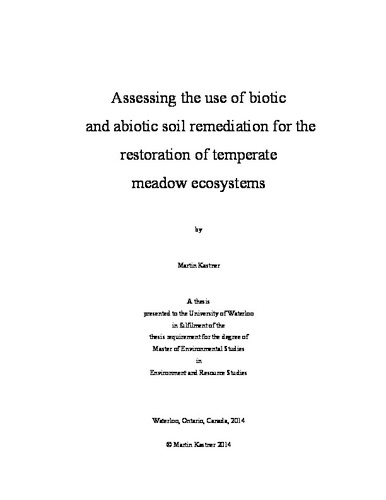 While the extent of grasslands in Southern Ontario has been greatly reduced, urban and suburban areas provide numerous potential sites for their restoration. Grassland restoration in cities can provide ecological and cultural benefits, but soil conditions may be less than optimal for native species recovery. This thesis explores the use of soil amendments in order to address nutrient deficiency on old-field meadow restoration sites. Five treatments were tested, namely the addition of (1) nitrogenous fertilizer, (2) native legume species, (3) biochar, (4) a combination of the previous three, and (5) an unaltered control. Each treatment was replicated four times on two different test plots in Waterloo Region, Ontario, Canada (Huron Natural Area and Springbank Farm), for a total of 40 subplots. The experimental plots were tilled in the fall of 2011, a randomly selected treatment was applied to each subplot, and then all were seeded with a mix of five native meadow species (2 grass, 2 forb, 1 sedge). Soil samples were taken from each subplot both before treatment application and also at the end of the growing season in 2012, and tested for nutrient levels (N, P, K), pH and organic matter. Species richness, as well as soil temperature and moisture, were regularly monitored over the growing season. In the fall of 2012, above-ground vegetation was harvested to assess accrued biomass. In order to detect differences in means, results were tested using one-way and repeated-measures ANOVAs, where appropriate. Pearson’s product-moment correlations were also employed to test for linear dependence between variables. There were no significant differences between treatments in terms of soil nutrients or pH at either site. At Huron Natural Area, post-treatment biochar-treated subplots had slightly higher levels of organic matter than controls (p=0.095). Values for species richness, above-ground biomass, soil temperature and soil moisture did not vary significantly between treatments. Species richness at Huron Natural Area was positively correlated with 2011 N (r=0.42; p=0.07) and organic matter (r=0.52; p=0.02) levels, while at Springbank Farm it was negatively correlated with 2012 N levels (r=-0.67; p<0.001). Above-ground biomass at Huron Natural Area was positively correlated with 2011 and 2012 P levels (both r=0.52; p=0.02), while at Springbank Farm it was positively correlated with 2011 N, P, K and organic matter, and 2012 N, P and K (all r>0.44; p<0.05). At Huron Natural Area, above-ground biomass was negatively correlated with soil temperature (r=-0.64; p<0.0001) and positively correlated with soil moisture (r=0.38; p=0.1). This study uncovered a strong, but variable, relationship between N concentration and species richness in old-field meadows. Furthermore, productivity was tightly correlated with different soil nutrient concentrations at each study site. The results demonstrate the need for restoration approaches to address local soil conditions on order to be effective. To date, there have been very few studies on meadow restoration, particularly in North America. More, and longer-term, multivariate studies are needed in order to test the effectiveness of different techniques.

Martin Kastner (2014). Assessing the use of biotic and abiotic soil remediation for the restoration of temperate meadow ecosystems. UWSpace. http://hdl.handle.net/10012/8301