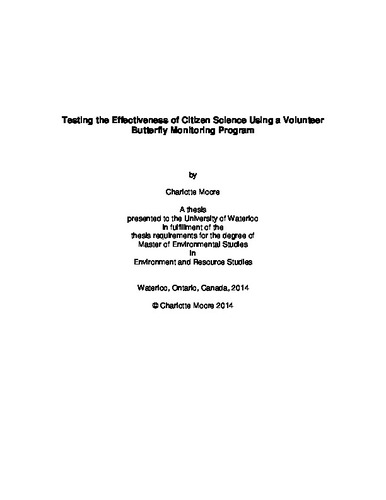 An increasingly popular method of collecting scientific data is to use citizen scientists in community-based monitoring programs. Numerous formal and community-based monitoring programs use butterflies as indicator species to detect and understand changes in ecosystems. A butterfly monitoring program was established with the City of Kitchener in 2012, in order to measure the effectiveness of citizen science observations in identifying butterfly assemblages. Two monitoring sites were used: Lakeside Park contained relatively simple butterfly habitats, and Huron Natural Area which included complex butterfly habitats. The program consisted of training volunteers to collect data on the butterfly assemblages. Volunteers were given the choice to monitor an established trail at either natural area once every two weeks from the beginning of May to the end of August using the modified Pollard method. It was important to train volunteers how to monitor butterflies, so they were required to attend an instruction workshop to learn the methods to be employed, identification of butterflies, use of the recording form, and proper net and butterfly handling techniques. Quality control measures were another important component of the program, and included comparing volunteer observations at each natural area to those collected by an expert. Each species observation was reviewed to determine the likelihood of the species observation. The species and its habitat were compared to the information and status recorded in The Butterflies of Waterloo Region. The data collected by the participants was analyzed separately by study site and included the calculation of species richness, Shannon-Wiener Diversity Index (H), evenness value, Simpson Index (D), and Simpson Reciprocal (1/D) values. A two-tailed t-test was conducted to compare the data (as represented by Shannon indexes) collected by volunteers and the expert. The species richness for Lakeside Park was 29, which was slightly higher than the 26 species identified at Huron Natural Area. However, the Shannon-Wiener Diversity Index (H), evenness value (E), Simpson Diversity Index (D), and Simpson Reciprocal Index (1/D) all demonstrated that there was a more even and diverse butterfly population at Huron Natural Area than at Lakeside Park. A high level of validity of volunteer observations was found during this study, as 93% of submitted observations at Lakeside Park and 94% of submitted observations at Huron Natural Area passed the review process. Based on the high level of validity of observations it was determined that the volunteers were successful in characterizing butterfly assemblages, and establishing baseline conditions at each site. The City of Kitchener will be collecting long-term butterfly data, which they can compare over time to provide insight into the diversity at these natural areas. This research program has contributed to the field of science and to the literature by establishing a review process for citizen science, particularly for butterfly programs. It has also provided further validation of citizen science data.