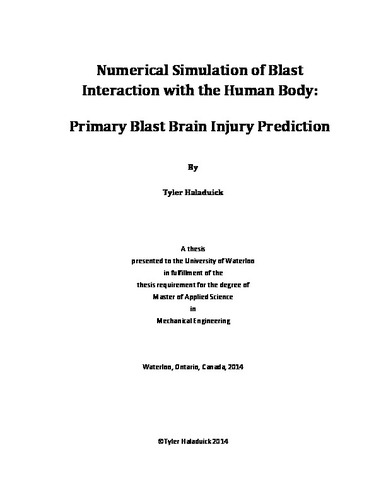 In Operations Enduring Freedom and Iraqi Freedom, explosions accounted for 81% of all injuries; this is a higher casualty percentage than in any previous wars. Blast wave overpressure has recently been associated with varying levels of traumatic brain injury in soldiers exposed to blast loading. Presently, the injury mechanism behind primary blast brain injury is not well understood due to the complex interactions between the blast wave and the human body. Despite these limitations in the understanding of head injury thresholds, head kinematics are often used to predict the overall potential for head injury. The purpose of this study was to investigate head kinematics, and predict injury from a range of simulated blast loads at varying standoff distances and differing heights of bursts. The validated Generator of body data multi-body human surrogate model allows for numerical kinematic data simulation in explicit finite element method fluid structure interaction blast modeling. Two finite element methods were investigated to simulate blast interaction with humans, an enhanced blast uncoupled method, and an Arbitrary Lagrangian Eularian fully coupled method. The enhanced blast method defines an air blast function through the application of a blast pressure wave, including ground reflections, based on the explosives relative location to a target; the pressures curves are based on the Convention Weapons databases. LBE model is efficient for parametric numerical studies of blast interaction where the target response is the only necessary result. The ALE model, unlike classical Lagrangian methods, has a fixed finite element mesh that allows material to flow through it; this enables simulation of large deformation problems such as blast in an air medium and its subsequent interaction with structures. The ALE model should be used when research into a specific blast scenario is of interest, since this method is more computationally expensive. The ALE method can evaluate a blast scenario in more detail including: explosive detonation, blast wave development and propagation, near-field fireball effects, blast wave reflection, as well as 3D blast wave interaction, reflection and refraction with a target. Both approaches were validated against experimental blast tests performed by Defense Research and Development Valcartier and ConWep databases for peak pressure, arrival time, impulse, and curve shape. The models were in good agreement with one another and follow the experimental data trend showing an exponential reduction in peak acceleration with increasing standoff distance until the Mach stem effect reached head height. The Mach stem phenomenon is a shock front formed by the merging of the incident and reflected shock waves; it increases the applied peak pressure and duration of a blast wave thus expanding the potential head injury zone surrounding a raised explosive. The enhanced blast model was in good agreement with experimental data in the near-field, and mid-field; however, overestimated the peak acceleration, and head injury criteria values in the far-field due to an over predicted pressure impulse force. The ALE model also over predicted the response based on the head injury criteria at an increased standoff distance due to smearing of the blast wave over several finite elements leading to an increased duration loading. According to the Abbreviated Injury Scale, the models predicted a maximal level 6 injury for all explosive sizes in the near-field, with a rapid acceleration of the head over approximately 1 ms. There is a drastic exponential reduction in the insult force and potential injury received with increasing standoff distance outside of the near-field region of an explosive charge.