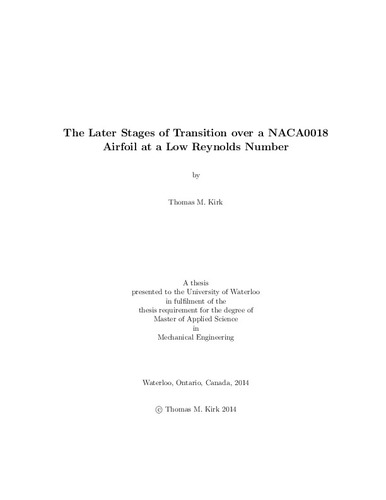 The later stages of separated shear layer transition within separation bubbles developing over a NACA0018 airfoil operating at a chord Reynolds number of 105 and at angles of attack of 0, 5, 8, and 10 degrees were investigated experimentally in a wind tunnel. Several experimental tools, including a rake of six boundary-layer hot-wire anemometers, were used to perform measurements over the model. Novel high-speed flow visualization performed with a smoke-wire placed within the separated shear layer showed that roll-up vortices are shed within separation bubbles forming on the suction side of the airfoil. The structures were found to convect downstream and eventually break down during laminar-to-turbulent transition. Top view visualizations revealed that, at angles of attack of 0, 5, and 8 degrees, roll-up vortices form coherently across the span and undergo significant spanwise deformations prior to breaking down. At angles of attack of 5 and 8 degrees, rows of streamwise-oriented structures were observed to form during vortex breakdown. Statistics regarding the formation and development of shear layer roll-up vortices were extracted from high-speed flow visualization sequences and compared to the results of boundary layer measurements. It was found that, on the average, roll-up vortices form following the initial exponential growth of unstable disturbances within the separated shear layer and initiate the later stages of transition. The onset of these nonlinear stages was found to occur when the amplitude of velocity disturbances reached approximately 10% of the free-stream velocity. The rate of vortex shedding was found to fall within the frequency band of the unstable disturbances and lie near the central frequency of this band. The formation of vortices has been linked to the generation of harmonics of these unstable disturbances in velocity signals acquired ahead of mean transition. Once shed, vortices were found to drift at speeds between 33% and 44% of the edge velocity. Vortex merging at an angle of attack of 5° was investigated. It was found that the majority of roll-up vortices proceed to merge with either one or two other vortices. Vortex merging between two and three vortices was found to occur periodically in a process similar to vortex merging in plane mixing layers undergoing subharmonic forcing of the most amplified disturbance. The flapping motion of the separated shear layer was investigated by performing a cross-correlation analysis on the high-speed flow visualization sequences to extract vertical displacement signals of the smoke within the shear layer. The frequency of flapping was found to correspond to the unstable disturbance band. At an angle of attack of 5°, it was found that the separated shear layer has a low-frequency component of flapping that matches a strong peak in velocity and surface pressure spectra that lies outside the unstable disturbance frequency band. The spanwise development of disturbances was assessed in the aft portion of the separation bubbles by performing a cross-correlation analysis on signals acquired simultaneously across the span with the rake of hot-wires. The spanwise correlations between signals was found to be well-correlated ahead of shear layer roll-up, after which disturbances became rapidly uncorrelated ahead of mean reattachment. These results were found to be linked to the coherent roll-up and subsequent breakdown of roll-up vortices.