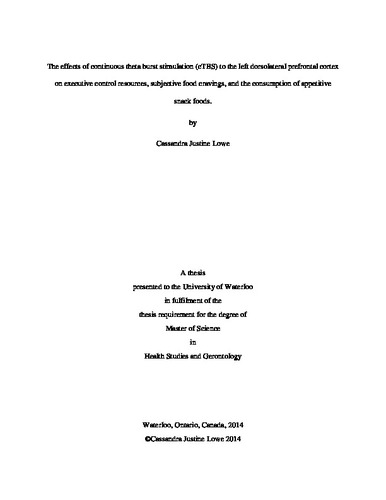 Prior research has demonstrated that stronger executive control resources (ECR) are positively associated with healthy dietary habits. Given that ECRs are understood to involve the operation of the prefrontal cortex, specifically the dorsolateral prefrontal cortex (DLPFC), the differential operation of the DLPFC may explain individual differences in dietary self-control. The present study was designed to examine the causal status of the relationship between DLPFC function and two parameters of dietary self-control: subjective food cravings and the consumption of appetitive snack foods. Using a within subjects design, 21 female participants received both active and sham continuous theta burst stimulation (cTBS) to the left dorsolateral prefrontal cortex. Subjective food cravings were assessed before and after each stimulation session, and the amount of food consumed during a bogus taste test was objectively measured following each stimulation session. In addition, following each stimulation session participants completed three standardized ECR measures. Results indicated that participants consumed significantly more snack foods following active as compared to sham stimulation, but this finding was specific to the consumption of appetitive foods (i.e., milk chocolate and potato chips). In addition, as compared with sham stimulation, performance on the Stroop task was significantly impaired following active stimulation. Finally, stronger food cravings were reported following active relative to sham stimulation, but these were highly selective the reinforcement-anticipation aspect of cravings. Together, these results support the contention that the ECRs, as modulated through DLPFC activity, regulates food cravings and the consumption of palatable energy dense foods.