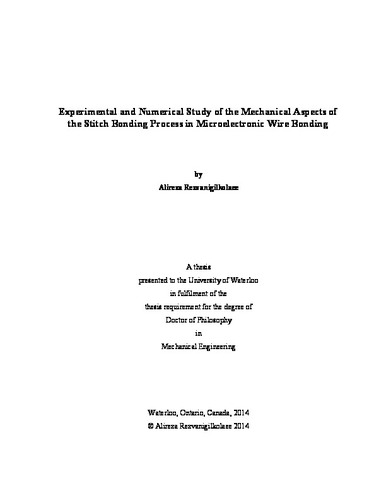 The goal of this thesis is to improve the understanding of the stitch bonding process in microelectronic wire bonding. In particular, it focuses on investigating the effect of the process parameters bonding force, scrub amplitude, and skid on experimental bond quality responses, including qualitative (non-sticking, sticking, and tail-lifting) and quantitative (stitch pull force, tail pull force). In addition to the experimental work, a finite element (FE) model is developed for the stitch bonding process using ABAQUS software, and compared with the experimental observations. For the first set of experiments, the stitch bonding is performed with a 18 μm diameter Pd coated Cu (PCC) wire on a “low bondability” Au/Ni/Pd plated quad-flat non-lead (QFN) substrate. Results showed that a high bonding force, a high scrub amplitude, and a positive skid provoke the sticking of the stitch bond and reducing the chance of non-sticking observation. However, such parameters also increase the chance of tail-lifting. As a trade-off for a low bondability substrate, a process parameter combination containing a high bonding force and a high scrub amplitude and a negative skid could ensure a strong enough stitch bonding process with low chance of tail-lifting. For the second set of experiments, the stitch bonding is performed with a 18 μm diameter uncoated Cu wire on a “high bondability” Ag plated QFN substrate. Statistical analysis of stitch and tail pull force showed that the skid and scrub parameters have a more significant influence than bonding force. A positive skid can degrade the stitch pull force, while enhancing the tail pull force. A high scrub amplitude is found to degrade both the stitch and the tail pull forces. The bonding force is shown to improve the stitch and tail pull forces slightly. Performing an optimization, process parameters of 70 gf (687 mN) bonding force, 3 μm scrub amplitude, and zero skid result in acceptable stitch and tail pull forces, along with a reliable stitch bond appearance (low peeling and shallow capillary tool impression). The influence of the process parameters is significantly different depending on if bonding on low or high bondability substrates. For example, a positive skid increases the chances of sticking and tail-lifting on low bondability substrate, but it decreases the tail pull force and increases the tail pull force for high bondability substrate. This indicates that finding a general experimental rule for understanding the effect of process parameters on the stitch bond quality is difficult if not impossible. In other words, instead of general rule, it is more likely to find individual rules for specific individual applications. To improve the understanding of stitch bonding a three dimensional (3D) dynamic explicit FE model is developed in ABAQUS. The model components and boundary conditions are constructed and applied to reflect the experimental conditions. The bonding force, scrub, and skid are successfully implemented into the model. Mass scaling is applied carefully to save calculation time while ensuring there are no artificial effects of inertia. The model is able to render the conventional responses reported in the past including stress and strain distributions. However, these conventional outputs were not sufficient to provide a correlation between model and experiment. Therefore, new candidate responses were developed and extracted from the numerical results. The new responses are based on accepted welding mechanisms. One of the mechanisms is interfacial cleaning by frictional energy which is beneficial for bonding. Thus the friction energy accumulated during the simulated bond duration is extracted as a candidate response. For classical cold welding processes, the interfacial surface expansion is a key mechanism, as it opens up cracks in the surface contamination and oxide layers and thereby generates paths to bring the fresh metals together under pressure. Therefore, candidate responses related to surface expansion at the contact interface are extracted from the model. The complete set of new responses extracted from the numerical model includes contact areas, surface expansion per areas, frictional energy, and combination of frictional energy combined with surface expansions per areas. In addition the bond interface is divided into “wedge” and “tail” regions. The model is run for the same DOE cells as used in the first set of experiments and candidate responses are extracted and compared with the experimental observations. By ranking the correlation coefficients of each individual candidate responses, for the first time correlations that are relatively strong are found between a numerical response and experimental observations of stitch bonding. Responses that have correlation coefficients of 0.79 and 0.85 were found for wedge sticking and tail-lifting, respectively. Such relatively strong correlation indicates that the friction enhanced cleaning and the surface expansion mechanisms are proper theories for the current stitch bonding system. These theories can be used for developing similar models for other types of the solid-state bonding processes. Based on the best candidate responses, a procedure to determine numerical process windows is demonstrated for a specific application. Such a window defines the parameter ranges which result in an acceptable stitch bonding process and is an excellent indication of how suitable a process is for mass production. Depending on the application, materials, geometries, and tools, the FE model and process window procedure allow a variety of numerical process windows to be produced and compared.