Identifying the mechanism of Aβ42 inhibition of PDGF-BB signalling 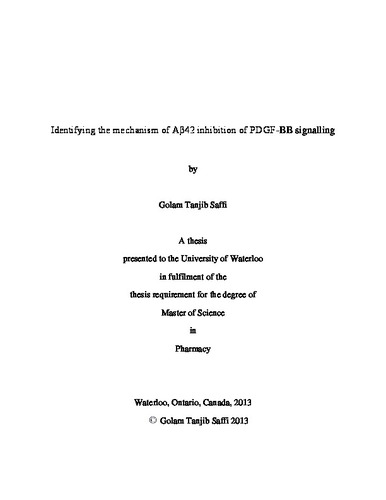 Alzheimer’s disease is a late-onset neurological disorder characterized by extracellular aggregates of Aβ plaques and neurofibrillary tangles of hyperphosphoryated tau protein resulting in neuronal dysfunction, cognitive decline and death. Some of the molecular mechanisms which cause neuronal dysfunction in Alzheimer’s disease are oxidative stress, excitotoxicity and hypoxia. PDGF-BB is a neurotrophic factor which is neuroprotective against these molecular events. However, PDGF-BB failed to be neuroprotective against Aβ42 toxicity in SH-SY5Y neuroblastoma cells. Rather, Aβ42 actually inhibited PDGF-BB signalling and reduced the phosphorylation level at multiple phosphotyrosine sites on the PDGFβ receptor. Aβ42 inhibition of PDGF-BB signalling also inhibited a downstream effector, Akt, a neuroprotective protein. Thus, Aβ42 inhibition of PDGF-BB signalling could worsen oxidative stress, excitotoxicity and hypoxia observed in Alzheimer’s disease. Indeed, Aβ42 treatment prevented PDGF-BB neuroprotection against excitotoxicity. Aβ42 mediated inhibition of PDGF-BB signalling was not due to Aβ42 interaction with PDGFβ receptor. However, it remains inconclusive whether Aβ42 binds to PDGF-BB to prevent PDGF-BB binding to PDGFβ receptor.