Investigating the Relationship between Householders’ Engagement with Feedback and Electricity Consumption: An Ontario, Canada Case-Study 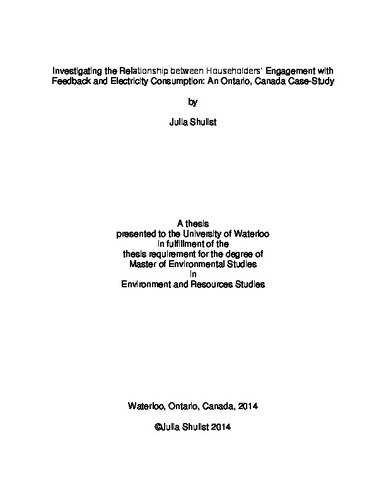 In this study, 22 homes in Milton, Ontario had their electricity consumption monitored for between seven and 15 months, and they were provided access to their data via an online webportal. The webportal provided appliance-level and house-level data, allowed them to set consumption goals, and schedule when their appliances would be used. The households were chosen to participate because they had previously expressed interest in advanced smart meter grid technologies, and when contacted again by Milton Hydro, they agreed to participate in the study. The main question being asked in this research is: what effect, if any, does having access to one’s consumption data have on consumption? To investigate this question, consumption data from the monitoring period, and the previous year (the base year) were obtained from Milton Hydro and were used to determine how consumption changed between these two periods. The consumption data for the cooling months were weather normalized to account for increases in consumption that result from cooling the dwelling. Data regarding users’ engagement with the webportal, including how often they would login, for how long and what pages they were visiting, were collected from the webportal. An engagement index was adapted and refined from Peterson & Carrabis (2008), and along with the engagement data from the webportal, was used to calculate the engagement index. Data from two surveys were used to profile the households and to investigate their attitudes and behaviours towards electricity consumption. There were several key findings. First, engagement with the webportal was quite low; the engagement index (a value between zero and one) for the first three months the hub was open averaged 0.285 and ranged from 0 to 0.523. These numbers dropped by the end of the seventh month to an average engagement index of 0.163, and ranged from 0 to 0.341. The second key finding was that the hubs were not consistently conserving electricity; for the first three months, 10 of the 22 households had conserved electricity between the base year and monitoring period; at the end of the seventh month, this dropped to nine households. At the end of the third month, the change in consumption was an increase of 8.22%, and at the end of month seven it was an increase of 7.71%. The third finding was that there did not appear to be a connection between energy conserving attitudes and energy conserving behaviours. In the surveys, 12 households stated that their goal was to conserve electricity, however, of these 12, only four actually conserved electricity at the end of month seven. Finally, when comparing the engagement index with the change in consumption, there appeared to be only a weak, negative correlation between the variables. This weak correlation may be a result of two things: (1) a lack of engagement, which limits the ability to find correlation between engagement and change in consumption; (2) there is actually a weak relation between the two variables. Based on these findings, some recommendations are put forth, specifically about how to engage householders with the webportal. Suggestions include getting applications for mobile devices, and delivering electricity saving tips to households via e-mail, text message, and/or on the homepage of the portal. These tips could be given based on the season, or based on the goals that were set, and would encourage and explain to householders how to decrease consumption.