Agency and Autonomy: A New Direction for Animal Ethics 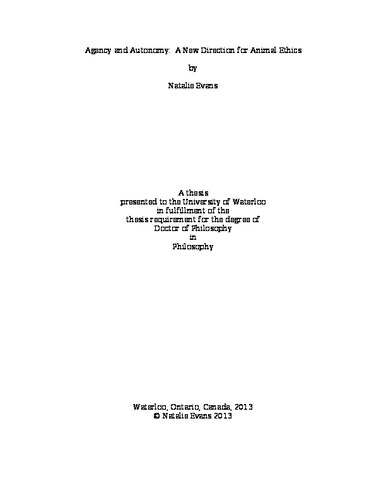 The main problem addressed in animal ethics is on what grounds and to what extent we owe animals moral consideration. I argue that many animals deserve direct moral consideration in virtue of their agency, selfhood and autonomy. I start by providing an account of agency and selfhood that admits of degrees, from minimal to complex, among animal species that is supported by current research on consciousness and the mental capacities of animals. I posit that agency and selfhood are morally valuable as they allow for subjective mental experiences that matter to conscious individuals. I then develop a view of autonomy that corresponds to my view of agency and selfhood, whereby the degree to which an individual is self-aware indicates the degree to which that being is autonomous. I argue that autonomy not only consists in the rational and reflective capacities of humans, but also at a more minimal level where autonomy is simply the ability to make choices. I support this view of autonomy as choice with an account of ‘naturalized autonomy’ and explain some of the implications of this view for animals. After considering the views of Peter Singer, Tom Regan and Bernard Rollin on animal ethics, I analyze the flaws in their reasoning and argue that my own view provides a stronger account for the direct moral consideration of animals. This is due to my inclusion of agency, selfhood and autonomy, which these philosophers mainly neglect. I review some current reinterpretations of Kant’s moral arguments that claim animals ought to be considered ends-in-themselves. I present reasons why the inclusion of selfhood would strengthen this claim and further develop my argument for respecting the autonomy of animals. I conclude that a theory of animal ethics based on agency, selfhood and autonomy provides the strongest account for the direct moral consideration of animals, as it is empirically informed and provides a moral middle path between animal welfare and animal rights.