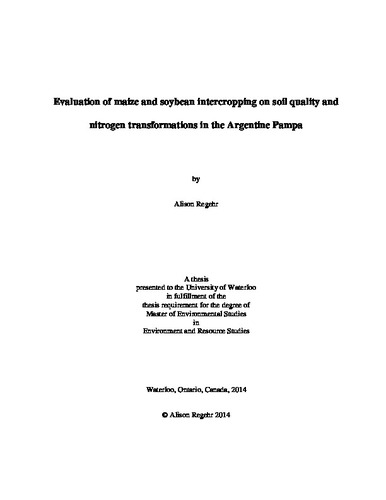 Agricultural intensification to increase food, feed, and fibre production has also resulted in environmental degradation, including poorer soil quality and high emissions of greenhouse gases (GHGs) like nitrous oxide (N2O). Intercropping, an agroecosystem management practice where more than one crop is planted on the same plot of land at the same time, promotes the complementary use of soil nutrients, and may improve soil quality and increase the retention of inorganic nitrogen (N) in the soil, thereby reducing N2O emissions. An experiment was conducted in Balcarce, Argentina to determine the impact of intercropping maize (Zea mays L.) and soybean (Glycine max (L.) Merr.), (either 1:2 or 2:3 rows of maize to soybean) on soil quality and soil N transformations after six cropping seasons. It was found that intercropping significantly improved soil quality over a six year period, as indicated by the soil organic carbon (SOC), soil total nitrogen (TN), soil light fraction organic matter (LF), and soil microbial biomass carbon (SMB-C). However, the soil quality also significantly improved in the sole crops over this time, and in 2012, only SMB-C was significantly (p<0.05) greater in the 2:3 intercrop than in the sole crops. Intercropping resulted in higher rates of gross nitrogen (N) mineralization than the sole crops, and the 2:3 intercrop resulted in higher rates of gross N immobilization than in the other treatments. However, the high rate of gross N mineralization resulted in a low relative NH4+ immobilization in both intercrops, signifying a lower potential for reducing soil NH4+ concentrations than in the sole crop treatments. Net N immobilization occurred in all treatment plots, which was desired at the end of the fallow period to reduce N losses from the soil. The 2:3 intercrop appeared to perform better than the 1:2 intercrop. However, further research needs to be conducted to determine the seasonal variations in N mineralization and immobilization, and to further examine the intercrop spatial arrangements to increase crop residue yield.

Alison Regehr (2014). Evaluation of maize and soybean intercropping on soil quality and nitrogen transformations in the Argentine Pampa. UWSpace. http://hdl.handle.net/10012/8149