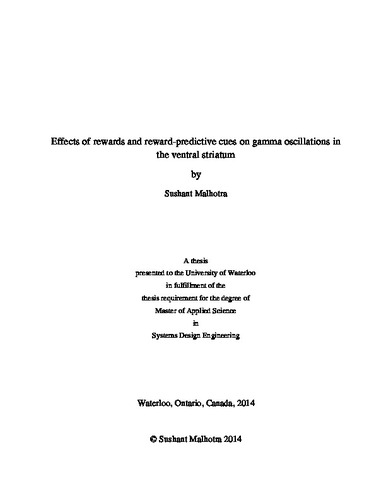 Decisions, such as choosing between different rewards, are known to be influenced by a number of variables such as value, uncertainty and delay associated with a rewarding outcome. Various structures in the brain are responsible for handling different aspects of reward related decision making. To understand how such decisions are made, we can attempt to reverse engineer the brain. This involves understanding how brain activity is related to the representation and processing of rewards and also to subsequent behavior in response to rewarding events. One of the central elements of the reward circuitry of the brain is the ventral striatum. It has traditionally been known as the limbic-motor interface and thought to act as a link between various structures in the brain that are responsible for processing reward and reward related behavior. To study the neural processes that underlie processing rewards, I recorded from the ventral striatum of rats as they performed a cue-reward task. The aim of my project was twofold: First, to examine how rats behave in response to changes in value and uncertainty associated with a particular rewarding outcome and second, to investigate how rewards and cues that predict rewards are represented in the neural activity of the ventral striatum. Rats (n=6) were trained on a cue-reward task, where cues indicated the mean or variance of associated outcome distributions. Behavioral responses to the reward predictive cues demonstrated that the rats learned the value and risk associated with subsequent reward outcomes. Ventral striatal gamma oscillations are known to align to rewards in a variety of reward motivated tasks. However, it is not clear if these oscillations are associated with anticipation of obtaining the reward or the reward itself. In previous studies, reward delivery has been correlated with the anticipation of reward. In the current work, a delay is used to distinguish between anticipation of reward and the reward delivery itself. This is achieved by making the rats nose poke for a fixed time interval before the arrival of reward. The analysis presented in this thesis reveals that ventral striatal gamma oscillations occur both during the anticipation and delivery of reward, opening up the possibility of formal tests. They also align to arrival of cues that predict rewarding outcomes. This suggests that gamma oscillations might be essential for modulating behavior in response to cues and rewards both before and after reward delivery. Ventral striatum is ideally situated to modulate behavior in response to rewarding events. Past studies show that ventral striatal neural activity is associated with reward and reward motivated actions. However, as suggested by the research presented in this thesis, it is not clear what specific aspects of the decision making process can be attributed to the ventral striatum once learning in complete. Studying the ventral striatum is important because its malfunctioning is implicated in brain disorders such as drug addiction.