A Microfluidic System for Pathogen Detection Based on DNA Hybridization 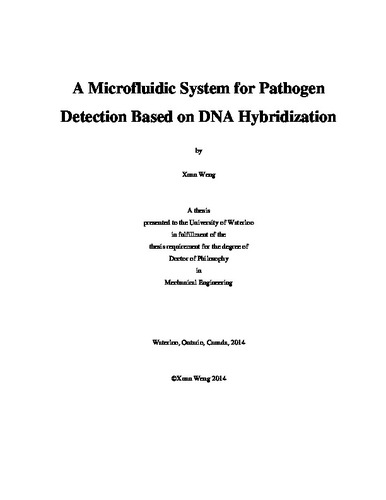 With the great development of the microfluidics, the applications of microfluidic devices in conducting biomedical research have been drawn substantial interests from scientists and researchers all over the world. These microfluidic lab-on-a-chip systems create clinically useful technologies and have a number of competitive advantages over the conventional biomedical instruments due to the reduced reagents/samples consumption, decreased analysis times and operational costs. In addition, the microfluidic lab-on-a-chip systems facilitate the development of the portable devices and have the ability of automatically performing the multiple assay processes. At the present, increasing attention has been paid to the preventive detection of foodborne pathogens as the foodborne illness becomes a serious concern to the public health throughout the world. Early detection and notification of foodborne pathogenic bacteria is therefore of considerable significance in food safety control. DNA-based hybridization technique, as a rapid diagnosis tool for detecting foodborne pathogens, has presented distinctive advantages over the conventional microbiological culture-based methods for pathogen detection such as high sensitivity, specificity and rapidity, especially in the detection of the bacteria samples of low concentrations. In this thesis, a microfluidic platform combining DNA hybridization assay technique to detect foodborne pathogens is investigated. As the hybridization assay involves sequential loading and washing processes, magnetic beads are used as the matrix to immobilize the hybridization product; meanwhile microvalves are designed in the microfluidic chip to manage the sequential flow loading. In the first two designs, gravity force is used to drive the flow in the microchannels. A pair of electrokinetically-controlled oil droplet valves and electrothermally actuated phase change microvalves are used in these two microfluidic system, respectively. LabVIEW program was coded to implement the automatic operations of the assay. In the further improved microfluidic system, electrokinetics is applied to drive the flow, and a programmable High Voltage Sequencer is used to achieve the flow transportation automatically in an assay analysis cycle. Since no microvalves are required, this electrokinetics-based assay simplifies the preparation process of the microfluidic chip. Light absorption detection is used to analyze the quantified concentrations of the samples. This optical detection is verified firstly by a microscope. Later, a low-cost, miniaturized optical module is developed, which consists of a photo-detector and LED. The optical detection module is controlled by self-made circuit and coded LabVIEW program. iv To examine the performance of the microfluidic system, Salmonella and Listeria monocytogenes are used as a sample pathogen models. Based on the obtained results, the presented system successfully achieve the significantly reduction in reagent / sample consumption (up to 40 folds) compared with using the commercial test kit following the same protocol in conventional labs. In addition, the quantitative detection can be obtained in approximately 20 min, and the detection limit is as low as 103~104 CFU/mL. The microfluidic DNA hybridization assay chip demonstrated in this thesis presents an excellent potential in the development of a portable device for point-of-testing applications.