Ag Nanoparticles and their Application in Low-Temperature Bonding of Cu 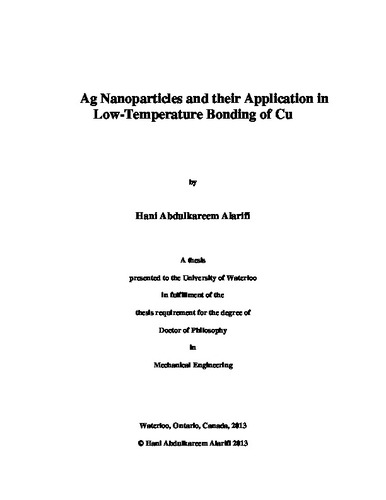 Ag nanoparticle (NP) paste was fabricated and used to bond Cu wire to Cu foil at low temperatures down to 433 K. The relatively low bonding temperature promotes this method to be used in polymer-based flexible electronics, which cannot withstand high bonding temperatures due the possible melting of the polymer substrate. Unlike low-temperature soldering techniquies, bonds formed by this method was proved to withstand temperatures higher than the bonding temperature, which also promotes it to be used in electronics that operate at high temperatures. The Ag NP paste was developed by increasing the concentration of 50 nm Ag NP sol from 0.001 vol.% to 0.1 vol.% by centrifugation. The 0.001 vol.% Ag NP sol was fabricated in water by reducing silver nitrate (AgNO3) using sodium citrate dihydrate (Na3C6H5O7.2H2O). The bond was formed by solid state sintering among the individual Ag NPs and solid state bonding of these Ag NPs onto both Cu wire and foil. Metallurgical bonds between Ag NPs and Cu were confirmed by transmission electron microscopy (TEM). The Ag NPs were coated with an organic shell to prevent sintering at room temperature. It was found that the organic shell decomposed at 433 K, defining the lowest temperature at which a bond could be formed. Shear tests showed that the joint strength increased as the bonding temperature increased due to enhanced sintering of Ag NPs at higher temperatures. For better understanding of the melting and the sintering kinetics of Ag NPs, a molecular dynamics (MD) simulation based on the embedded atom method (EAM) was conducted to different sizes of Ag NPs with diameters between 4 nm and 20 nm. Programmed heating of an equal rate was applied to all sizes of NPs to find the complete melting and surface premelting points and sintering kinetics of the Ag NPs. The initial structural configuration of the Ag NPs was FCC truncated octahedral, which found to be stable for this size range of NPs. As a first step toward drawing a phase map of stable solid phases of Ag NPs at different temperatures and sizes of Ag NPs, the stability of the FCC truncated octahedral was studied for Ag NPs in size range of 1 nm to 4 nm. The smallest Ag NPs at which this configuration is stable was determined as 1.8 nm. Unlike the previous theoretical models, this MD model predicted both complete melting and surface premelting points for a wider size range of NPs. Melting kinetics showed three different trends that are, respectively, associated with NPs in the size ranges of 4 nm to 7 nm, 8 nm to 10 nm, and 12 nm to 20 nm. Ag NPs in the first range melted at a single temperature without passing through a surface premelting stage. Melting of the second range started by forming a quasi-liquid layer that expanded to the core, followed by the formation of a liquid layer of 1.8 nm thickness that also subsequently expanded to the core with increasing temperature, completing the melting process. For particles in the third range, the 1.8 nm liquid layer was formed once the thickness of the quasi-liquid layer reached 5 nm. The liquid layer expanded to the core and formed thicker stable liquid layers as the temperature increased toward the complete melting point. The ratio of the quasi-liquid layer thickness to the NP radius showed a linear relationship with temperature. Sintering kinetics of two Ag NPs in the size range of 4 nm to 20 nm, and sintering of three and four Ag NPs of 4 nm diameter was also studied by MD simulation. The sintering process passed through three main stages. The first was the neck formation followed by a rapid increase of the neck radius to particle radius ratio at 50 K for 20 nm particles and at 10 K for smaller NPs. The second was characterized by a gradual linear increase of the neck radius to particle radius ratio as the temperature of the sintered structure was increased to the surface premelting point. A twin boundary was formed during the second stage that relaxed the sintered structure and decreased the average potential energy (PE) of all atoms. The third stage of sintering was a rapid shrinkage during surface premelting of the sintered structure. Based on pore geometry, densification occurred during the first stage for three 4 nm particles and during the second stage for four 4 nm particles. Sintering rates obtained here were higher than those obtained by theoretical models generally used for predicting sintering rates of micro-particles.