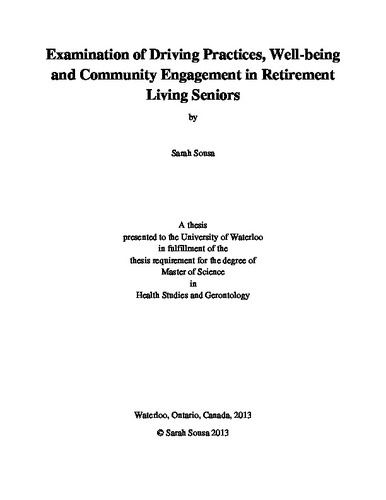 Introduction: Almost all the research on transportation use and travel patterns of older adults has been confined to community-dwelling seniors. This multi-phase project was initiated to gain a better understanding of transportation modalities (including driving) and travel patterns of seniors living in retirement complexes. The current study, Phase IV of the project, focused on residents who were still driving. Previous phases included surveys to determine driving status (Phase I) and general transportation use (Phase II), as well as an in-depth examination of residents 65+ who had recently stopped driving in the past two years (Phase III). Purposes: The primary objective of this study was to examine the actual driving practices of older drivers living in retirement communities, including associations with driver characteristics, perceptions of driving comfort and abilities, indicators of well-being, and extent of activity and group participation inside and outside the villages. This study also examined travel patterns outside the village, in addition to driving themselves. Methods: A convenience sample of 38 drivers (mean age 81.9 ± 5.6, range 70 to 91, 42% male) from five urban retirement villages located across Southern Ontario (Kitchener, Waterloo, Guelph, Etobicoke and Whitby), were assessed between February and July, 2013. Participant vehicles were equipped with two electronic data logging devices (one with GPS) for two weeks, during which time they also filled out trip logs (for each driving trip) and daily travel diaries (for non-driving trips). Participants also completed questionnaires (background and driving history, activities inside and outside the village) and scales to assess depression, well-being, perceptions of driving comfort and abilities and balance confidence. Interviews were conducted to examine their experiences over the two week period, as well as gather feedback on transportation at the retirement facilities. Results: Overall, the sample was highly educated, reported being in good health and not depressed. They were also considerably older and had a greater proportion of females than most community studies. Driving data were obtained for 32 participants. Participants drove an average of three days a week (range 0.5 to 6.5 days/week), and only eight (32%) drove at night. Consistent with findings on older drivers living in the community, driving trips were most often for shopping and errands (65% of total trip segments), followed by social and entertainment purposes (18%). The sample showed more restricted driving patterns when compared to prior studies with community seniors; driving substantially less at night (trips and distance). Most of the sample (73%) did not drive on days with bad weather. Driving perceptions (particularly night comfort) were significantly (p<0.05) associated to many driving indicators (days driven, trips, stops, duration and night driving indicators). As expected, the number of non-driving trips outside the village increased as the amount of driving decreased. The sample did not take many non-driving trips over the two weeks (3.7 ± 6.6, range 0 to 29) while some took many trips due to frequent walking trips. Walking (66% of total trips) and being a passenger in a vehicle (29%) were the most common modes of non-driving trips, with public transportation only accounting for less than 1% of all total trips. Non-driving trips were most often for recreational and social reasons, followed by shopping trips. Interviews suggested the sample was starting to think about driving cessation (20/38 or 53%) since moving to the village, where prior to that only one person (2.6%) had thought about it. Conclusions: Compared to community living seniors, older drivers living in retirement complexes are driving less. Services and amenities within the communities appear to be well utilized, which may reduce the need for travel outside the villages. Although use of public transit, taxis, paratransit and the facility bus (for group outings) was minimal, walking was popular for physical activity and going to shopping areas nearby. Participants reported driving less often after moving to the village and a significantly larger proportion thought about driving cessation only after moving. It is possible that living in a retirement residence makes driving less essential and therefore residents are leaving the village less often than someone living in the community. Although the study did not have a sufficient sample to conduct comparisons between village locations, the sample represented five different locations, therefore providing a better depiction of retirement living residents. The next phase of the project will help build on current findings by increasing the sample size and allowing for additional comparisons.