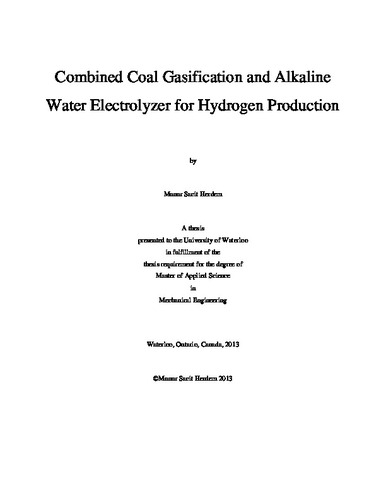 There have been many studies in the energy field to achieve different goals such as energy security, energy independence and production of cheap energy. The consensus of the general population is that renewable energy sources can be used on a short-term basis to compensate for the energy requirement of the world. However, the prediction is that fossil fuels will be used to provide the majority of energy requirements in the world at least on a short-term basis. Coal is one of the major fossil fuels and will be used for a long time because there are large coal reservoirs in the world and many products such as hydrogen, ammonia, and diesel can be produced using coal. In the present study, the performance of a clean energy system that combines the coal gasification and alkaline water electrolyzer concepts to produce hydrogen is evaluated through thermodynamic modeling and simulations. A parametric study is conducted to determine the effect of water ratio in coal slurry, gasifier temperature, effectiveness of carbon dioxide removal, and hydrogen recovery efficiency of the pressure swing adsorption unit on the system hydrogen production. In addition, the effects of different types of coals on the hydrogen production are estimated. The exergy efficiency and exergy destruction in each system component are also evaluated. Although this system produces hydrogen from coal, the greenhouse gases emitted from this system are fairly low.