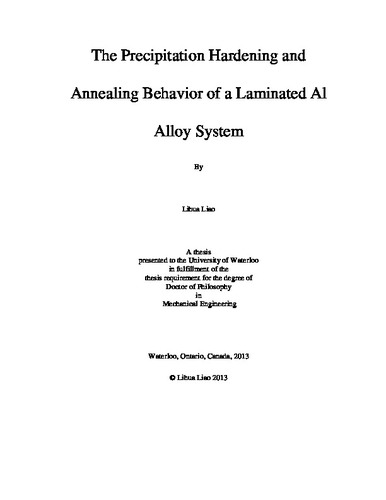 The laminated system processed using FusionTM technology is reported to contain a compositional gradient between the different layers. The interface region exhibits various precipitation characteristic during the subsequent heat treatment. The precipitation behavior at the interface region and core layer of a laminated AA3xxx-AA6xxx alloy system is investigated and discussed. The precipitation hardening capacity at the interface region is shown to scale with the existing compositional gradient. TEM observations reveal the precipitates at the interface region with a larger size and a lower number density than those at the core layer. A yield strength model developed for bulk AA6xxx series is employed to predict precipitate hardening behavior of the laminated sheet, and the modeling result shows an agreement with the measured values using a mass correction. The annealing behavior of the laminated system is investigated in a wide temperature range and at various deformation levels. The size and aspect ratio of the recrystallized grains are found to be determined by the interaction between recrystallization and precipitation, and by dissolution/coarsening of pre-existing precipitates. Under the condition of a low annealing temperature and a high deformation level, recrystallization initiates first at the interface region and then progresses into the core layer along the compositional gradient. The preferential onset of recrystallization at the interface is attributed to a higher driving pressure and a lower Zener drag pressure due to a low volume fraction of precipitates. Nucleation from large particles and grain boundaries is found to be operative nucleation mechanism in this system.