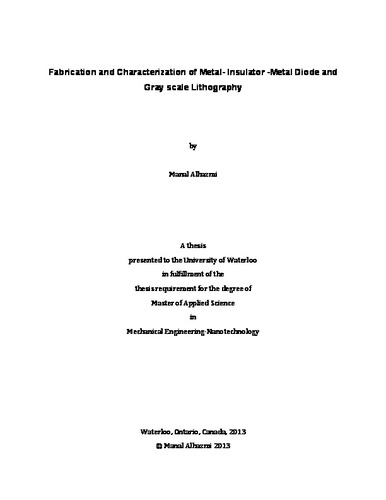 The objective of this thesis is to successfully design, fabricate, and characterize an optimum metal-insulator-metal diode that can be used as a fast switching diode in various applications such as solar energy conversion. The improvements of this type of diode will result in rectification of a wider spectrum of AC signals to usable electricity. In this project, several proposed designs of MIM diodes were successfully fabricated and characterized. Pt-Al2O3-Al metal-insulator-metal diode was fabricated to have high asymmetry in I-V curve. Additionally, in an attempt to study the effect of material properties on MIM diode’s performance, four different combinations of MIIIIM diode were compared and discussed. Many processes were involved in the fabrication of these diodes such as E-beam evaporation, photolithography, reactive ion etching RIE, and Atomic Layer Deposition (ALD) technique. The fabricated tunneling diodes are intended to operate in the GHz regime and can also operate at higher frequencies (THz) by changing and scaling the dimensions. In addition to MIM diode work, this project attempted to engineer the contrast curve of polystyrene as a negative resist used for E-beam lithography using multi layer resist stack. If the resist stack has a very high contrast and its sensitivity differs between the various layers, it can be ideal for the fabrication of multi-level zone-plate/Fresnel lens.