A Hybrid Theory of Evidence 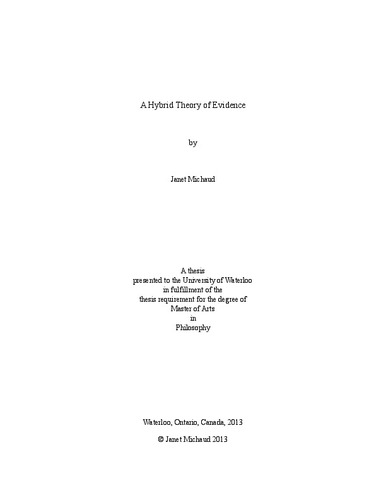 In the literature on doxastic evidence, the phenomenon is regarded as either internal (Plantinga 1993, Feldman and Conee 2001, Turri 2009) or external (Armstrong 1973, Collins 1997, BonJour 2008). Though the specifics of these views tend to vary, the two main categories are prominent. However, these views face various criticisms. Internalists claim that external evidence ignores relevant mental processes. Externalists claim that internal evidence is weak given its subjective nature. I will propose a remedy for both of these criticisms. I will argue that evidence is internal, external, and social. That is to say, that there are three types of evidence: mental states, states of affairs, and that which has been produced by a rigorous social process. I will extract Helen Longino’s method for establishing social knowledge (2002) and apply it to evidence; I will argue that her method produces social evidence as well. The social component of evidence is aimed towards strengthening internal and external theories of evidence by responding to the worries raised by the internalists and externalists. First, I will argue that a theory that accommodates both internal and external evidence can absolves the worries raised to either theory alone. Moreover, a theory that can accommodate social evidence will be stronger insofar as a rigorous social process will add a further qualification which can only strengthen our evidence. Second, I will argue that social evidence is not reducible to either external or internal evidence. The external view cannot account for the mental processes that are evidently a part of the justification process and is therefore weak. Finally, though the internal view is compelling, it does not account for evidence which supports our usage of automatic, non-conscious mental processes (Bargh and Chartrand 1999; Aarts and Dijksterhuis 2000).