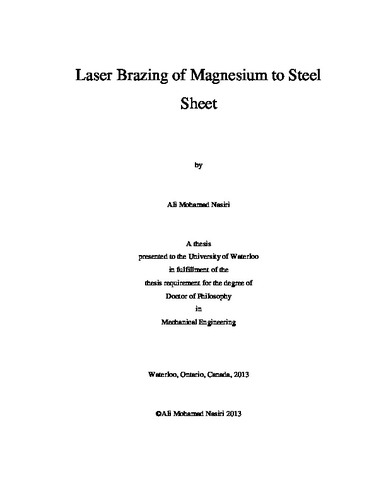 The ability to effectively join magnesium alloys to steel will facilitate increased application and use of Mg alloys in the automotive and aerospace industries where joining Mg alloys to steel in order to achieve light weight, versatile and tailored properties in one composite part is highly desirable. The current thesis details (i) the development of a laser brazing technology for joining Mg alloy-interlayer-steel dissimilar metal combinations, (ii) thermochemical analysis of phases formed at the interface of a Mg alloy-steel joint during laser brazing, (iii) the bonding mechanisms in the Mg alloy-interlayer-steel joints using Al-12Si, Ni, and Sn interlayers, and (iv) the mechanism responsible for wetting of steel by molten Mg alloy during the laser brazing. Firstly, a diode laser brazing procedure has been developed for joining AZ31B-H24 Mg alloy sheet to aluminum coated steel sheet using a AZ92 Mg alloy filler wire. The results of this study suggest that feasibility of this process depends strongly on the pre-existing Al-12Si coating layer on the steel sheet that promotes wetting of the AZ92 Mg alloy filler alloy as well as formation of a layer of θ-Fe(Al,Si)3 interetallic compound along the fusion zone-steel interface. The average joint efficiency was 29% with respect to the AZ31B-H24 Mg alloy base metal. Failure occurred when cracks propagated along the intermetallic layer. Secondly, to predict early stage phase formation in the Mg alloy-interlayer-steel system during the laser brazing process, the thermodynamic stability of precipitated phases at the Mg alloy-Ni-steel interface during laser brazing has been evaluated using FactSage thermochemical software. Assuming local chemical equilibrium at the interface, the chemical activity-temperature-composition relationships of intermetallic compounds that might form in the AZ92 magnesium alloy-Ni-steel system in the temperature range of 600-1100 °C were estimated. The addition of a Ni interlayer between the steel and the Mg brazing alloy was predicted to result in the formation of the AlNi, Mg2Ni, and Al3Ni2 intermetallic compounds at the interface depending on the local maximum temperature. This was confirmed experimentally by laser brazing of AZ31B-H24 magnesium alloy and steel sheet with a micro-layer of electro-deposited Ni using AZ92 magnesium alloy filler wire. Bonding between the magnesium alloy and the steel was facilitated by the formation of a transition layer composed of a solid solution of Ni in Fe on the steel followed by a layer of α-Mg + Mg2Ni eutectic. A band of AlNi with different morphologies also formed along the fusion zone-steel interface, but was not directly responsible for bonding. The average joint efficiency was 56.5% with respect to the AZ31B-H24 Mg alloy base metal and 94.8% higher than that of laser brazed joint using Al-12Si interlayer. Thirdly, to study a low melting point temperature interlayer element, the brazeability of AZ31B-H24 magnesium alloy sheet to Sn-coated steel sheet has been investigated. All tensile-shear specimens fractured in the steel base metal well away from the brazed joint. The results showed that while the Sn coating promoted good wetting between the molten filler alloy and the steel sheet, it did not play a role in forming the final bond. Its primary function appeared to be in maintaining a clean, oxide-free steel surface until the molten Mg filler alloy could come in direct contact with the steel surface. Bonding between the magnesium alloy and the steel was facilitated by the formation of two nano-scale transition layers composed of Fe(Al) solid solution on the steel followed by a layer of Al8Mn5 phase on top of Fe(Al) in the fusion zone along the interface. High resolution-TEM analysis showed that an orientation relationships (OR) with low angle of rotation of the matching planes and low interplanar mismatch existed at the Fe(Al)-Al8(Mn,Fe)5 interface. This was found to be responsible for the low interfacial energy density, good wetting and strong interfacial bond observed in this complex dissimilar metal system. Finally, wetting has been characterized by measuring the contact angles of AZ92 Mg alloy on Ni electro-plated steel as a function of measured peak temperature reached during laser heating. Reactions between molten Mg and Ni led to a contact angle of about 86º in the peak temperature range of 618-750 ºC (denoted as Mode I) and a dramatic decrease to about 46º in the temperature range of 824-1020 ºC (denoted as Mode II). Scanning and transmission electron microscopy (SEM and TEM) indicated that AlNi + Mg2Ni reaction products were produced between Mg and steel (Mg-AlNi-Mg2Ni-Ni-Fe) in Mode I, and just AlNi between Mg and steel (Mg-AlNi-Fe) in Mode II. From high resolution TEM analysis, the measured interplanar mismatches for different formed interfaces in Modes I and II were 17% {Mg-AlNi}-104% {AlNi-Mg2Ni}-114% {Mg2Ni-Ni} and 18% {Mg-AlNi}-5% {AlNi-Fe}, respectively. Therefore, it is suggested that the poor wettability in Mode I was caused by the existence of Mg2Ni since AlNi was the immediate layer contacting molten Mg in both Modes I and II and the presence of Mg2Ni increases the interfacial strain energy of the system. This study has clearly demonstrated that the lattice mismatching at the interfaces between reaction product(s) and substrate, which are not in direct contact with the liquid, can greatly influence the wetting of the liquid.