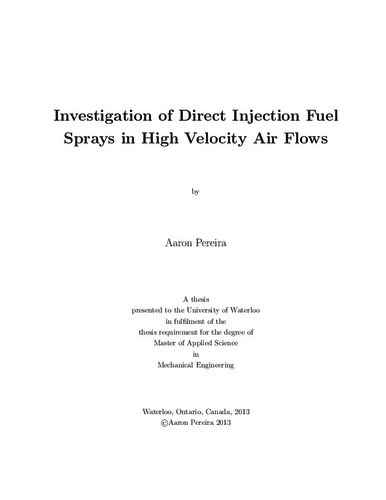 The study of single-plume sprays into cross-flowing air is found extensively in literature, however, with the continued development of the Spark Ignition Direct Injection (SIDI) engine, the behaviour of multi-plume sprays in cross-flowing conditions is of interest. In the present work, the injection of a multi-plume spray into a high-velocity cross-flow is investigated; an experimental apparatus capable of providing a cross-flow with core velocities higher than 200 m/s is developed; analysis techniques are developed to characterize the cross-flow and multi-plume spray independently; the multi-plume spray is characterized as it issues into the cross-flowing air. The round air jet used for the cross-flow was designed using the concepts put forth for the design of wind tunnel contractions. The axial and radial velocities were measured using a Particle Image Velocimetry system from LaVision Inc. and the potential core length determined for the core velocities corresponding to Mach numbers of 0.35 and 0.58. It was determined that the potential core length increases with increasing Mach number and that increased compressibility, leads to reduced mixing within the core. Furthermore, velocity profiles of the air jet show that self-similarity is preserved within the shear layer of the initial region. The multi-plume spray was also characterized in quiescent conditions for 10 and 15 MPa injection pressures. It was found that the penetration depth and spray width increased with increasing injection pressure, but that the spray angle decreased with increasing pressure. The increase in penetration depth is consistent with the findings presented in literature, while the decrease in spray angle with increasing pressure is contrary to literature. Next, the multi-plume spray, injected at 10 and 15 MPa, is characterized as it issues into the cross-flowing air stream at Mach numbers equal to 0.35 and 0.58. The tail length and penetration are measured and it is found that for the first, the cross-flow velocity is the primary factor with higher cross-flow velocity resulting in a longer tail length, while for the latter, the injection pressure is the major factor, with higher injection pressures resulting in higher penetrations. That being said, the injection pressure does play a small role in the tail length, with the 15 MPa injection having a slightly longer tail length than the 10 MPa injection in the Mach number 0.58 cross-flow. This is attributed to the finer atomization, which is expected from the 15 MPa injection and which leads to quicker entrainment of fuel droplets into the cross-flow. The spray axis was predicted for each set of conditions from 0.1 ms to 1.0 ms after Start of Fuel (SOF). It was found that before 0.3 ms, the spray retains its multi-plume nature, while after 0.3 ms it behaves like a single-plume spray. Once the spray has crossed this transition point, the spray axis is temporally independent and can be predicted by the logarithmic models, similar to those used for single-plume sprays in cross-flow. The accuracy of this fit is improved upon, with the presentation of a modified correlation, which includes the momentum flux ratio inside of the logarithmic term. Finally, the multi-plume spray issuing into the cross-flow is characterized using PIV to measure droplet velocities. It is observed that the cross-flow momentum is imparted to the smaller droplets within the 15 MPa spray more easily than to those of the 10 MPa injection, but that the 15 MPa sprays also retain their momentum in the radial direction longer than the 10 MPa sprays. As such, the 10 MPa sprays align with the cross-flow axis faster.