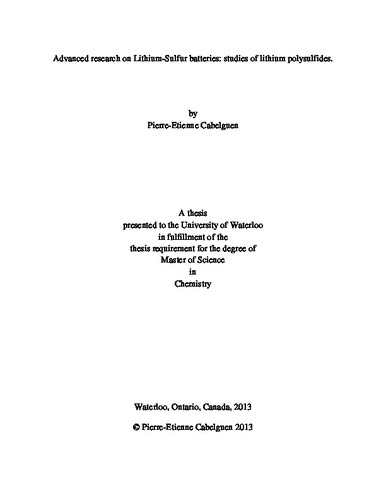 This thesis was devised as a fundamental study of the Li-S system by the use of 7Li Magic Angle Spinning (MAS) Nuclear Magnetic Resonance (NMR), X-ray Absorption Near- Edge Structure (XANES), and Non-Resonant Inelastic X-ray Scattering (NRIXS). The first part of this thesis reports the first evidence of a stable solid-phase intermediate between elemental sulfur (α-S8) and Li2S, Li2S6, which can be used to understand deeper Li-S battery. The second part of this thesis is based on operando XANES measurements made in the Argonne Photon Source (APS).Linear combination fit (LCF) analyses are performed to interpret the data; and, noticeably, the distinction between short-chain and long-chain polysulfides can be made due to the use of proper reference materials. The results reveal the first detailed observation of typical sulfur redox chemistry upon cycling, showing how sulfur fraction (under-utilization) and sulfide precipitation impact capacity. It also gives new insights into the differences between the charge and discharge mechanisms, resulting in the hysteresis of the cycling profile. Operando XANEs were also performed on het-treated material, which exhibits a particular electrochemical signature, which has never explained. After a preliminary electrochemical study by potentiodynamic cycling with galvanostatic acceleration (PCGA), operando XANES measurements at the sulfur K-edge are performed on heat-treated PCNS. Noticeably, the difference in the XANES signatures of the pristine and the recharged state shows the irreversible process that occurs during the first discharges. At last, electrolytes are investigated by the compilation of quantitative physico-chemical parameters – viscosity, ionic conductivity, and solubility of Li2S and Li2S6 – on novel class of solvents that are glymes with non-polar groups and acetonitrile (ACN) complexed with LiTFSI. 1,1,2,2-Tetrafluoroethyl 2,2,3,3-tetrafluoropropyl ether (HFE) is chosen to decrease their viscosities. (ACN)2:LiTFSI attracts particular attention because of the particularly low Li2Sn solubility and. Its good electrochemical performance when mixed with 50 vol% HFE. Operando XANES proves the formation of polysulfides in this electrolyte, although constrains imposed by this novel electrolyte to the XANES experiment complicate the data analysis. The low energy feature evolution shows a more progressive mechanism involved in this electrolyte, which could be linked to the particularly low Li2Sn solubility