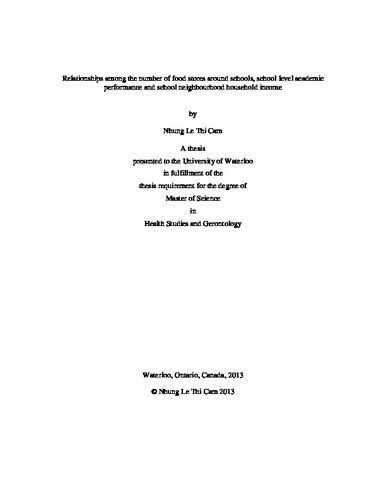 Abstract Objectives: This study aimed to investigate the number of food stores (FS) within 500m, 1000m and 1500m of Region of Waterloo schools and describe them by type: full-service restaurants, fast food restaurants, supermarket and convenience stores; and then by elementary and secondary school levels. In addition, the associations among FS counts, median family income for the school neighbourhoods and school level academic performance were also examined. Methods: Data for 2008 and 2010 on food stores, school addresses and school results on provincial academic tests (EQAO) were obtained from publicly available information (Region of Waterloo food inspection premises data; Waterloo Region District School Board and Waterloo Catholic District School Board; and Ontario’s Education Quality and Accountability Office (EQAO) as well as the Fraser Institute, respectively). The 2006 Statistics Canada census data on median household income for Dissemination Areas surrounding schools was used as the proxy for income. Food stores were classified into the four store types based on the North American Industry Classification System (NAICS). The ArcGIS program was used to geocode the addresses of food stores and schools in the Region of Waterloo. It was also used to create the buffer zones (500m, 1000m and 1500m) around schools and to calculate the number of food stores within each buffer. In addition, multiple linear regression and logistic regression were used to explore the associations between food store counts to school neighbourhood income and school level academic performance indicators. School neighbourhood family income, parent education, students’ competency in English and population density were considered as study covariates. Results: From 2008 to 2010, the number food stores of all types increased in the Region of Waterloo as a whole. However, within the three buffer zones (500m, 1000m and 1500m), while the number of full-service restaurants, convenience stores and total stores were higher in 2010 than in 2008, food store counts of fast food restaurants and supermarkets were not always higher in 2010 compared to 2008. Nevertheless, of all food story types, the counts were highest for fast food restaurants in both years (2008 and 2010) and at all buffer zones around schools (500m, 1000m and 1500m) as well as for the Region of Waterloo as a whole. In addition, negative associations were found between fast food restaurant, convenience store and total store counts and school neighbourhood family income. Furthermore, these associations remained robust even after controlling for population density. Regarding food store counts and students’ academic performance, most of the significant associations were negative and were found for supermarkets, convenience stores and total store, with more significant associations in 2010 than in 2008. Most of the significant associations were found for elementary schools and when EQAO scores were treated as continuous versus binary variables. Interestingly, Grade 3 EQAO scores tended to be associated with supermarket and total store counts, whereas Grade 6 EQAO scores tended to be associated with convenience store and total store counts. Although several associations became insignificant after adjusting for study covariates (school neighbourhood family income, parent education and students’ competency in English), many significant associations remained and followed the trends observed before controlling for the covariates. Implications for practice: The totality of evidence from the current study suggests that the number of food stores around a school has a relationship to academic performance even when key factors such as neighbourhood family income and parental education are considered. If such associations were confirmed and explained through further research, there would be potential policy implications, for example, regarding zoning of food stores around schools and school practices.