The spring reverse migration of landbirds in the Pelee region: 2010-2012 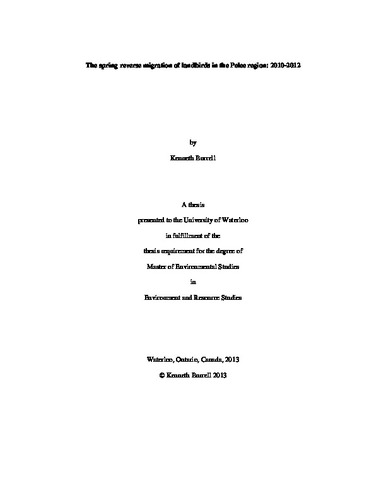 The spring reverse migration of landbirds (i.e., birds flying in the direction opposite to be expected), within the Great Lakes region is controversial because it is not understood if the extent or reversal of flight direction in spring is truly a change in migratory patterns or a brief anomaly. It is also not clear what the fitness and community level impacts are. My objective was to determine what and how weather influences reverse migration and to determine which species and families of birds participate the most frequently in this form of flight. I examined species which are participatory (and those that are not) as well as the impacts of specific weather covariates on the abundance of landbirds and focused explicitly on the putative reverse migration of landbirds. Field sites were located at the extreme southern tip of Fish Point, Pelee Island (2010-2012) and Point Pelee National Park (2012), where my field assistant and I visually recorded the total number of birds observed to be reverse migrating, while identifying all birds to species or family as best possible. This study was conducted over 97 days during April 26 – May 20, in 2010-2012. Information pertaining to potential reverse migration has only been formally documented twice in the Great Lakes region, most recently in 1951. I undertook a descriptive analysis to compare the numbers of individuals of bird species and families. Temperate and neotropical migrants were examined, compared, and divided into sub-sets based on their geographic ranges. I identified species at risk and vagrants which I observed during reverse migrations. Based on provincial population estimates, I determined the proportion of all reverse migrants where ≥200 individuals were observed. A descriptive analysis was undertaken to determine differences between sites (i.e., Point Pelee and Fish Point) in the final year of surveys (2012). Species and abundance were comparatively differentiated between each site and subsequently compared. While very few birds were observed flying anything but south, a total of 61,677 birds of 80 species was documented flying south. My results indicate temperate migrants vastly outnumbered neotropical migrants (as much as 4:1) and numbers of birds varied between study sites. Temperate migrants were noted to be more common (in the final study year) at Point Pelee compared to Fish Point, while neotropical migrants were more numerous at Fish Point than Point Pelee. Despite the fact that most migrant species participated in reverse migrations (i.e., of the species regularly occurring in the Pelee region at this time of year), complete absences were noted, most notably in Catharus thrushes, while species such as Rose-breasted Grosbeak and Scarlet Tanager, and families such as Tyrant Flycatchers, Vireos and Sparrows were observed to be less prevalent than anticipated. Species at risk and vagrants were noted relatively frequently during this study, suggesting that these surveys are an efficient and potentially important tool for migration monitoring in this region. Diurnal migrants, most notably Blackbirds, were observed to engage in reverse migration in higher numbers than nocturnal migrants, such as Wood Warblers. Seven weather covariates were measured and modeled with the total number of birds detected using R to determine which covariates explain the most amount of variation of the total number of birds during my surveys. I used an AICc approach to select the best model for each hypothesis. After selecting the top weather covariates with time lags according to the best (lowest) AICc values, I built general models by comparing all possible combinations of the covariates identified in the top models for each hypothesis. I included a random effect intercept for study site to discern any site difference or similarities between Point Pelee and Fish Point and specified a Poisson distribution (log-link function as implemented in the LMER package) because the data set was continuous (time-series) and count oriented. My adjusted time lag results show that most migrants tend to migrate during and ahead of inclement weather and/or periods of south winds. I also found that all identified covariates influence reverse migration to some degree. Wind direction and barometric pressure were the most significant of the covariates examined (β = 0.718 and -0.213, respectively). Specifically, wind direction is the most important covariate in explaining reverse migration, with days of south winds dramatically increasing the probability of higher numbers of birds during surveys. Low barometric pressure is also important for explaining the number of observed reverse migrants; therefore, days with lower barometric pressure have a greater likelihood of increased bird observations. Based on my observations and results I theorized that while reverse migration pertains to a distinct form of flight, it is likely not an actual form of migration. This form of flight at its simplest is likely a form of reorientation, whereby migratory birds take advantage of local weather conditions by flying south for extended distances. I anticipate that this form of flight must have serious consequences for the fitness levels and life-cycles of migratory birds. Studies looking at reverse migration provide a useful tool for migration monitoring, particularly as it is an underexplored phenomenon. Observations of thousands of birds, many of which are either species at risk or vagrants, collected in an efficient manner are vital for determining population trends related to migratory birds. Continuing this study would aid on-going monitoring programs assessing bird populations passing through the lower Great Lakes region. These studies will also help us understand the impacts of climate and climate change on migratory birds.