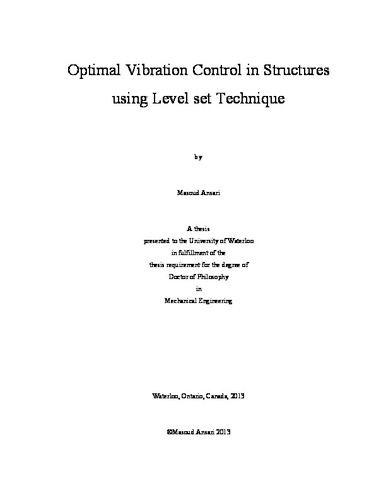 Vibration control is inevitable in many fields, including mechanical and civil engineering. This matter becomes more crucial for lightweight systems, like those made of magnesium. One of the most commonly practiced methods in vibration control is to apply constrained layer damping (CLD) patches to the surface of a structure. In order to consider the weight efficiency of the structure, the best shape and locations of the patches should be determined to achieve the optimum vibration suppression with the lowest amount of damping patch. In most research work done so far, the shape of patches are assumed to be known and only their optimum locations are found. However, the shape of the patches plays an important role in vibration suppression that should be included in the overall optimization procedure. In this research, a novel topology optimization approach is proposed. This approach is capable of finding the optimum shape and locations of the patches simultaneously for a given surface area. In other words, the damping optimization will be formulated in the context of the level set technique, which is a numerical method used to track shapes and locations concurrently. Although level set technique offers several key benefits, its application especially in time-varying problems is somewhat cumbersome. To overcome this issue, a unique programming technique is suggested that utilizes MATLAB© and COMSOL© simultaneously. Different 2D structures will be considered and CLD patches will be optimally located on them to achieve the highest modal loss factor. Optimization will be performed while having different amount of damping patches to check the effectiveness of the technique. In all cases, certain constraints are imposed in order to make sure that the amount of damping material remains constant and equal to the starting value. Furthermore, different natural frequencies will be targeted in the damping optimization, and their effects will also be explained. The level set optimization technique will then be expanded to 3D structures, and a novel approach will be presented for defining an efficient 4D level set function to initialize the optimization process. Vibrations of a satellite dish will be optimally suppressed using CLD patches. Dependency of the optimum shape and location of patches to different parameters of the models such as natural frequencies and initial starting point will be examined. In another practical example, excessive vibrations of an automotive dash panel will be minimized by adding damping materials and their optimal distribution will be found. Finally, the accuracy of the proposed method will be experimentally confirmed through lab tests on a rectangular plate with nonsymmetrical boundary conditions. Different damping configurations, including the optimum one, will be tested. It will be shown that the optimum damping configuration found via level set technique possesses the highest loss factor and reveals the best vibration attenuation. The proposed level set topology optimization method shows high capability of determining the optimum damping set in structures. The effective coding method presented in this research will make it possible to easily extend this method to other physical problems such as image processing, heat transfer, magnetic fields, etc. Being interconnected, the physical part will be modeled in a finite element package like COMSOL and the optimization advances by means of Hamilton-Jacobi partial differential equation. Thus, the application of the proposed method is not confined to damping optimization and can be expanded to many engineering problems. In summary, this research: - offers general solution to 2D and 3D CLD applications and simultaneously finds the best shape and location of the patches for a given surface area (damping material); - extends the level set technique to concurrent shape and location optimization; - proposes a new numerical implementation to handle level set optimization problems in any complicated structure; - makes it possible to perform level set optimization in time dependent problems; - extends level set approach to higher order problems.