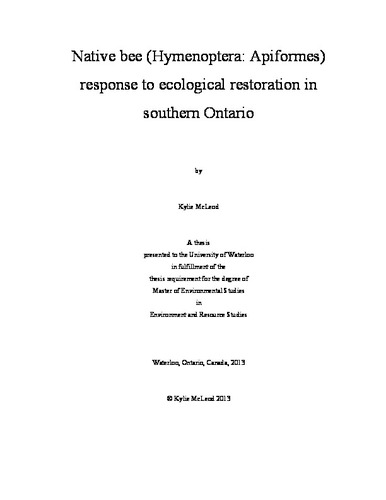 Bee declines have been reported globally and habitat loss and degradation due to urbanization and agricultural intensification are two of the primary drivers. Native bees play a critical role in plant reproduction, and declines in abundance and diversity of bees are expected to impact flowering plant biodiversity and productivity of insect pollinated agricultural crops. Habitat restoration can help mitigate declines by increasing the amount and quality of available bee habitat. However, outside of agroecosystems bees are rarely specified in restoration targets and little is known about how they respond to habitat restoration. My thesis addresses this knowledge gap by: (1) documenting the structure and function of the native bee community at a restored wet meadow to establish a baseline for future monitoring activities, (2) comparing the influence of two restoration approaches on the established bee community, and (3) exploring changes in functional groups and pollination function with time since restoration. I sampled bees at degraded, restored, and (semi)natural habitats at 12 sites in four locations in southern Ontario. I used a combination of structural (abundance, richness, and evenness) and functional (guilds based on social and nesting habits and plant-pollinator interaction networks) characteristics to describe and compare bee communities. I collected a total of 10,446 bees from 30 genera and six families representing a range of phenologies, social behaviours, and nesting habits. At Dunnville Marsh, a restored wet meadow, I collected 5,010 bee specimens from 27 genera and six families. The bee community at Dunnville Marsh was diverse and well connected within 4-6 years of restoration, emphasizing the importance of wet meadows as native bee habitat. However, wood nesters and cleptoparasites were relatively uncommon suggesting that the community may be less stable compared to older habitats. Between 2005 and 2008, individual fields at Dunnville Marsh were dug with pits and mounds before planting and seeding or were seeded into weedy ground. Digging pits and mounds did not convey a clear advantage to the establishing bee community, but genus richness was greater in pit and mound sites (p=0.04). As well, the restoration approach used influenced the relative representation of guilds within the community. Ground nesters and wood nesters were significantly more abundant in pit and mound treated sites (p<0.001), perhaps reflecting the larger amounts of bare ground (p<0.001) and the greater potential for sapling survival on mound tops. Stem nesters were more abundant in planted sites (p<0.001), and floral richness and abundance did not differ between the two restoration approaches. Finally, diversity and evenness of guilds based on social and nesting habits increased with age since restoration, indicating that communities in (semi)natural habitats are more functionally diverse than those in restored habitats, but that communities in restored habitats are more functionally diverse than those in degraded habitats. Relative abundance of guilds changed with age since restoration in ways that reflected structural habitat changes associated with succession. Degraded sites had the highest relative abundance of ground nesters, while (semi)natural sites had the highest relative abundance of wood nesters. Plant-pollinator interaction networks did not demonstrate clear trends with respect to age since restoration, but indicated that communities that establish in response to non-targeted restorations can be diverse, robust to extinction, and well connected.