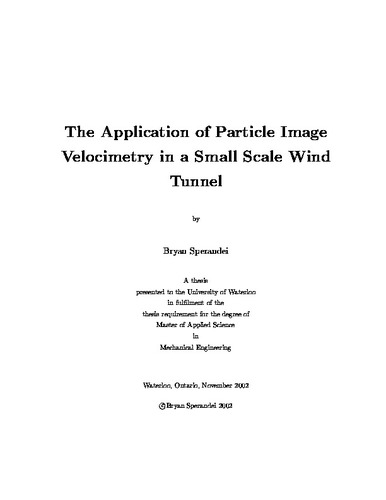 This study investigated the applicability of Particle Image Velocimetry (PIV) as a velocity measurement technique for use in wind tunnel flows. To carry out the investigation, a small scale wind tunnel was designed and built to be used specifically with PIV. The tunnel employed a novel contraction geometry which was compared to six other contraction designs using a computational fluid dynamics (CFD) software package. The wind tunnel configuration allowed for full optical access in the test section to allow for PIV measurements in three dimensions. The calibration and characterization of the flow quality within the wind tunnel were performed using PIV. Velocity measurements were obtained in the empty test section to assess the degree of uniformity, alignment, and turbulence at various test speeds. The longitudinal velocities were found to deviate by an average of 1. 8% along any given velocity profile. The flow was found to be well aligned with the test section walls, deviating by no more than &plusmn;0. 20° in most cases. As well, the turbulence levels in the test section were found to be low, with average intensities of 2. 0% and 0. 5% in the longitudinal and transverse directions, respectively. Following the characterization of the flow in the empty wind tunnel, a square cylinder was placed in the test section and PIV measurements were performed at a Reynolds number of 21,400. Mean velocities and turbulence intensities measured around the square cylinder were found to compare well with previous works conducted at similar Reynolds numbers in water flows. As a final validation of the wind tunnel/PIV system, measurements were made of the flow over a 1:18 scale Formula One racecar model at a free stream velocity of 40 <i>m/s</i>. The PIV system collected a large quantity of velocity information around the model, providing insight into the aerodynamic aspects of racecars such as downforce devices and vehicle draughting. The experiments performed in this study led to the conclusion that PIV is indeed a measurement technique with high potential for use in small wind tunnels, providing more spatially resolved velocity data than any other known measurement technique. The advancement of digital camera technology will make PIV a more practical measurement technique for use in larger wind tunnels as well.