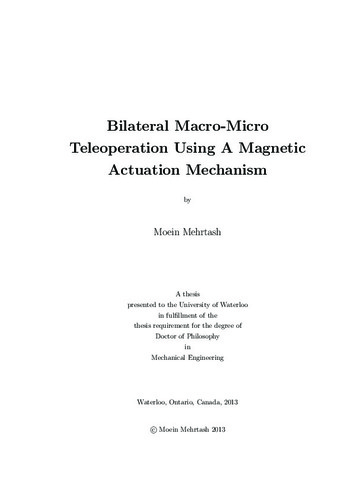 In recent years, there has been increasing interest in the advancement of microrobotic systems in micro-engineering, micro-fabrication, biological research and biomedical applications. Untethered magnetic-based microrobotic systems are one of the most widely developing groups of microrobotic systems that have been extensively explored for biological and biomedical micro-manipulations. These systems show promise in resolving problems related to on-board power supply limitations as well as mechanical contact sealing and lubrication. In this thesis, a high precision magnetic untethered microrobotic system is demonstrated for micro-handling tasks. A key aspect of the proposed platform concerns the integration of magnetic levitation technology and bilateral macro-micro teleoperation for human intervention to avoid imperceptible failures in poorly observed micro-domain environments. The developed platform has three basic subsystems: a magnetic untethered microrobotic system (MUMS), a haptic device, and a scaled bilateral teleoperation system. The MUMS produces and regulates a magnetic field for non-contact propelling of a microrobot. In order to achieve a controlled motion of the magnetically levitated microrobot, a mathematical force model of the magnetic propulsion mechanism is developed and used to design various control systems. In the workspace of 30 × 32 × 32 mm <sup>3</sup>, both PID and LQG\LTR controllers perform similarly the position accuracy of 10 µ m in a vertical direction and 2 µ m in a horizontal motion. The MUMS is equipped with an eddy-current damper to enhance its inherent damping factor in the microrobot's horizontal motions. This paper deals with the modeling and analysis of an eddy-current damper that is formed by a conductive plate placed below the levitated microrobot to overcome inherent dynamical vibrations and improve motion precision. The modeling of eddy-current distribution in the conductive plate is investigated by solving the diffusion equation for vector magnetic potential, and an analytical expression for the horizontal damping force is presented and experimentally validated. It is demonstrated that eddy-current damping is a crucial technique for increasing the damping coefficient in a non-contact way and for improving levitation performance. The damping can be widely used in applications of magnetic actuation systems in micro-manipulation and micro-fabrication. To determine the position of the microrobot in a workspace, the MUMS uses high-accuracy laser sensors. However, laser positioning techniques can only be used in highly transparent environments. A novel technique based on real-time magnetic flux measurement has been proposed for the position estimation of the microrobot in case of laser beam blockage, whereby a combination of Hall-effect sensors is employed to find the microrobot's position in free motion by using the produced magnetic flux. In free motion, the microrobot tends to move toward the horizontally zero magnetic field gradient, B<sub>max</sub> location. As another key feature of the magnetic flux measurement, it was realized that the applied force from the environment to the microrobot can be estimated as linearly proportional to the distance of the microrobot from the B<sub>max</sub> location. The developed micro-domain force estimation method is verified experimentally with an accuracy of 1.27 µ N. A bilateral macro-micro teleoperation technique is employed in the MUMS for the telepresence of a human operator in the task environment. A gain-switching position-position teleoperation scheme is employed and a human operator controls the motion of the microrobot via a master manipulator for dexterous micro-manipulation tasks. The operator can sense a strong force during micro-domain tasks if the microrobot encounters a stiff environment, and the effect of hard contact is fed back to the operator's hand. The position-position method works for both free motion and hard contact. However, to enhance the feeling of a micro-domain environment in the human operator, the scaled force must be transferred to a human, thereby realizing a direct-force-reflection bilateral teleoperation. Additionally, a human-assisted virtual reality interface is developed to improve a human operator's skills in using the haptic-enabled platform, before carrying out an actual dexterous task.