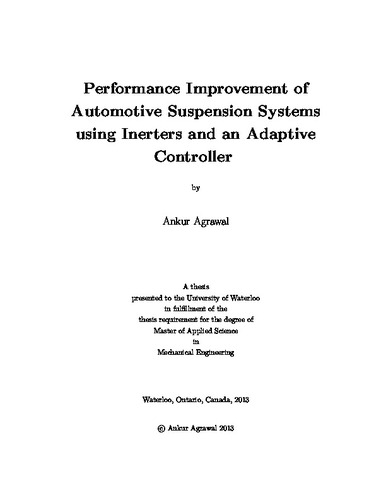 The possible benefits of employing inerters in automotive suspensions are explored for passenger comfort and handling. Different suspension strut designs in terms of the relative arrangement of springs, dampers and inerters have been considered and their performance compared with that of a conventional system. An alternate method of electrically realizing complex mechanical circuits by using a linear motor (or a rotary motor with an appropriate mechanism) and a shunt circuit is then proposed and evaluated for performance. However, the performance improvement is shown from simulations to be significant only for very stiff suspensions, unlike those in passenger vehicles. Hence, the concept is not taken up for prototyping. Variable damping can be implemented in suspension systems in various ways, for example, using magneto-rheological (MR) fluids, proportional valves, or variable shunt resistance with a linear electromagnetic motor. Hence for a generic variable damping system, a control algorithm is developed which can provide more comfort and better handling simultaneously compared to a passive system. After establishing through simulations that the proposed adaptive control algorithm can demonstrate a performance better than some controllers in prior-art, it is implemented on an actual vehicle (Cadillac STS) which is equipped with MR dampers and several sensors. In order to maintain the controller economical so that it is practically viable, an estimator is developed for variables which require expensive sensors to measure. The characteristic of the MR damper installed in the vehicle is obtained through tests as a 3-dimensional map relating suspension speed, input current and damping force and then used as a look-up table in the controller. Experiments to compare the performance of different controllers are carried out on smooth and rough roads and over speed bumps.