Development of a MR Hydraulic Bushing for Automotive Applications 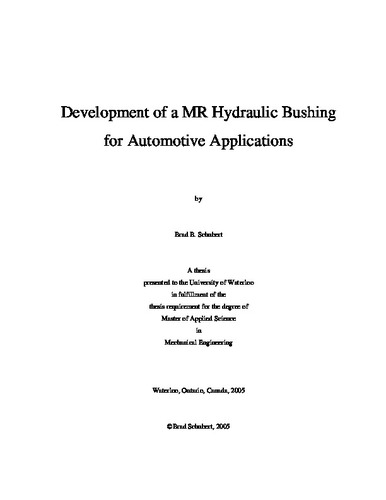 The purpose of this work is to design a semi-active magnetorheological (MR) hydraulic bushing. The semi-active bushing is intended to be used to isolate a cylinder deactivating engine. Cylinder deactivation causes high transient torsional loading in addition to changing the magnitude and mode of engine vibrations requiring an adaptive or controllable isolator. <br /><br /> Practical and simple semi-active control strategies are inspired by investigating the optimization of linear and slightly cubic nonlinear single degree of freedom isolators. Experimental verification of the optimization technique, which minimizes the root mean square (RMS) of engine acceleration frequency response and RMS of the force transmitted frequency response, shows that this method can be implemented on real linear systems to isolate the engine from harmonic inputs. This optimization technique is also applied to tune selected model parameters of existing two degree of freedom hydraulic bushings. <br /><br /> This thesis also details the development of a MR hydraulic bushing. The MR bushing design retrofits an existing bushing with a pressure driven flow mode valve on the inertia track. A new efficient valve design is selected and developed for the application. The MR hydraulic bushing is designed, mathematically modeled, and numerically simulated. The simulation results show that the MR bushing tends to increase the low frequency dynamic stiffness magnitude while simultaneously decreasing the phase. The next stage of the project is fabrication and testing of the semi-active bushing. The performance of the manufactured MR bushing is tested on a base excitation apparatus. Varying the current input to the MR valve was found to have a small effect on the response of the suspended mass. The results are in agreement with the effects demonstrated by the dynamic stiffness numerical simulation.